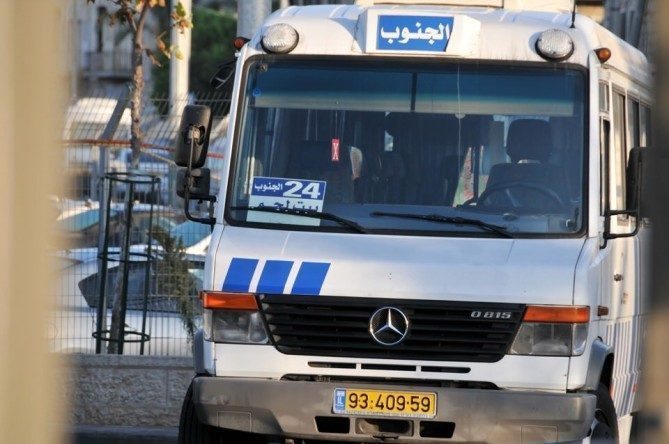 Riding on Jerusalem’s #24 Bus will teach you about freedom. You take tours to most places to see the sites.But, in Bethlehem, Palestine tours don’t show you what a bus ride can. My friends at St Mark’s recommended that I take the $24 bus. So, I decided to try it, why not?The bus to Bethlehem and walk through the Palestinian checkpoints is something I am glad I did. If you like to travel and want to go here, do it.

On the Road to Bethlehem, Palestine

The bus ride was about $5.00 round-trip. It was a public bus. So the public bus seems like a safe and easy trip. My guide waits for me at the other side of the checkpoint. So how complicated and adventurous could this be? 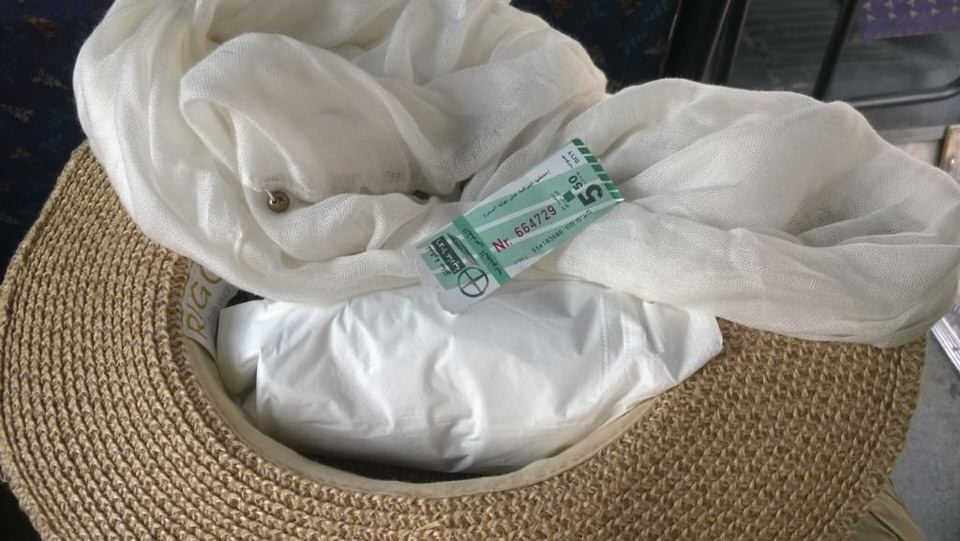 With my hat and scarf, I went to the bus station across the street from the entrance to the Arab Quarters of the Walled City of Jerusalem. 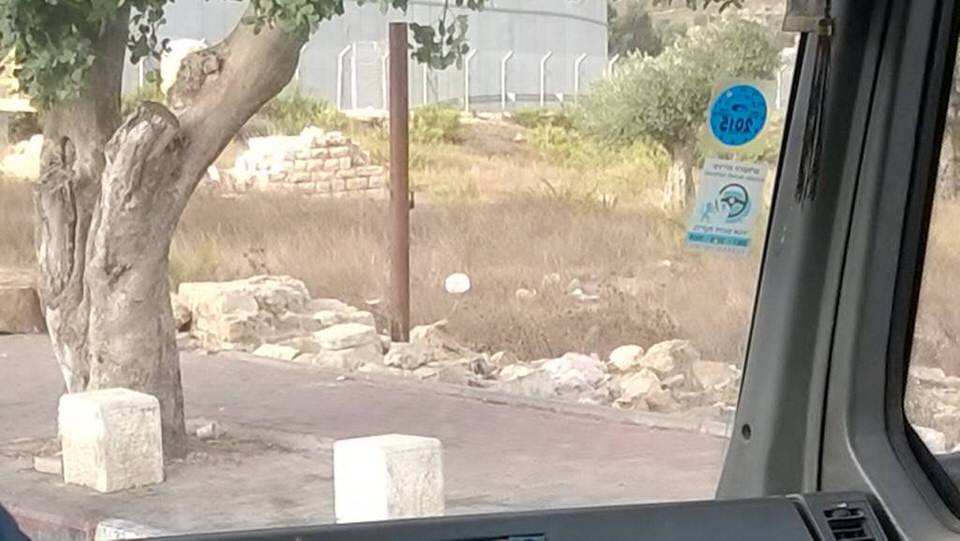 The ride on the #24 bus was exciting. I bought my ticket the day before and boarded the first bus to Bethlehem at 8 a.m. I sat next to a friendly young man, a student; he said, “Hi. Salam.”

After traveling for about five minutes, the bus stopped. I asked why we stopped.

Learning How to be Palestinian

“We are going to be boarded.” He said.

The door opened, and three soldiers entered the bus. They said something I couldn’t understand. Everyone shuffled and passports or documents came out and were held up in their hands for the soldiers to see.

I got my passport out. The soldiers took everyone’s passport, but didn’t take mine and motioned, “Never mind.”

“Why didn’t they take mine?” I asked the young man,

“You’re American. They don’t want trouble with you because your president draws a line in the sand.”

He got fidgety. I asked what was wrong, and he told me that he was a student and was going to be late for his exam. (We were on the first bus of the day.)

The soldiers came back and removed some men. Then they came back with the men. The men sat down quietly. One older man in the front of the bus had everyone’s documents.

The soldiers said something. I asked the student sitting next to me what they said. Then the old man was told to hand the passports back out to everyone.

The soldiers looked around one last time.

“What did the soldiers want?” I asked the young man.

The young student said they wanted to teach the people on the bus that they were in charge. I asked the student what we learned.

“We should be like the Americans – draw a line in the sand and then ignore the line.” He said defiantly.

I thought this student was very astute.

We drove on to the security gate at the entrance to Bethlehem, Palestine.

Here it is – it was a cement Wall – with chain-link fences and barbed wire, guard towers as you would see in a prison. A giant cement Wall surrounding the city.

Before I left Seattle, I heard stories about the entrance and that it looked like Guantanamo. But to see it firsthand is shocking.

Compared to the Bible stories of Jesus being born in Bethlehem and a manger in a stable seem to be idyllic images of countryside tranquility compared to the prison entrance was very troubling. I certainly didn’t conjure the image of Bethlehem surrounded by this wall that looks like a prison fortress. The wall at Bethlehem is the same type of wall Americans talk about building to keep illegals out of the USA.

Thinking about the Wall and seeing Bethlehem’s wall in this context stunned me.

The Road to Bethlehem, Palestine – The Wall 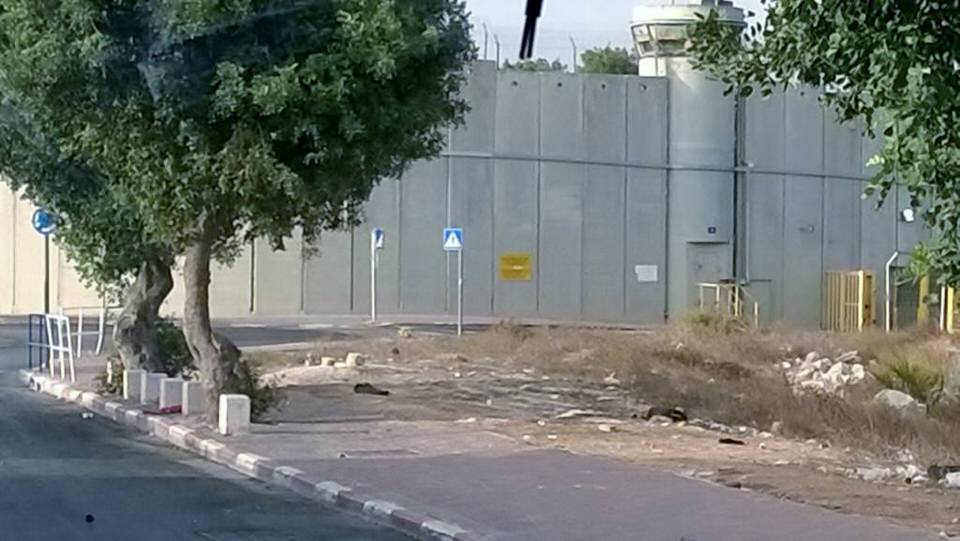 Graffiti was on the Wall, but I have no idea how anyone made graffiti. Surely this was an act of defiance. 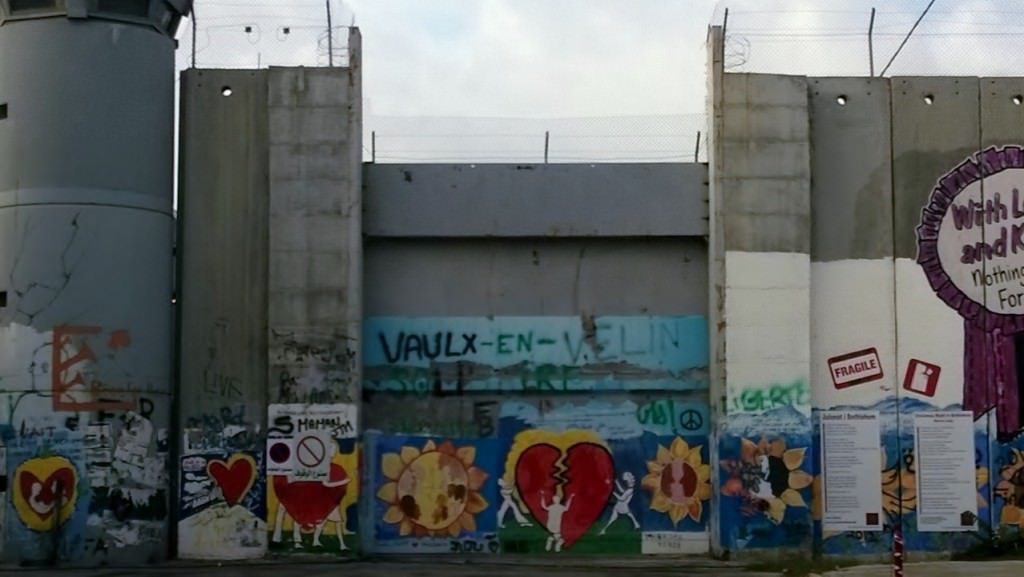 The Road to Bethlehem, Palestine – Nothing Lasts Forever

I think of graffiti – as today’s Renaissance. Graffiti is the art of the people, by the people, for the people. 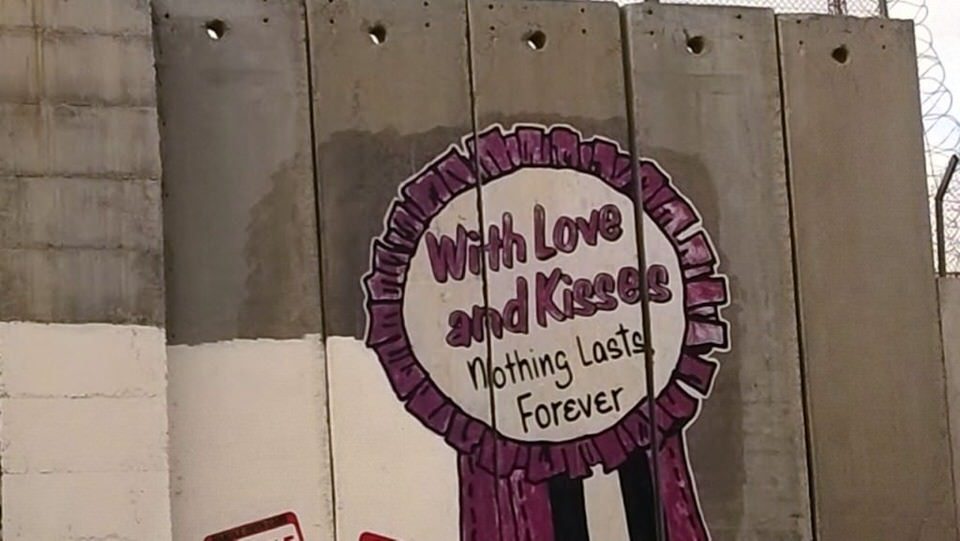 I walked through the stockade with the other bus riders. I showed my passport at a checkpoint and Elias Ghareeb (elias@grace-tours.com) met me on the other side by the gates, in a small parking lot with approximately 20 – 35 yellow taxis waiting.

Elias owns the tour company called Grace Tours. I was relieved and happy to see him because the other taxi drivers were aggressive. Elias was an excellent guide. One of the best I have had.

Bethlehem, Palestine is not all negative. We saw a wedding going on in one of the churches. So of course, I had to snap my Bride shot. Bethlehem could be anywhere in the USA except for the concrete wall. My feeling is that Bethlehem is a town of contradictions. Ordinary life happens in a surrounding that is anything but normal. Who lives in a Walled City? Jerusalem is an ancient walled city. It’s a different type of wall for a different purpose. 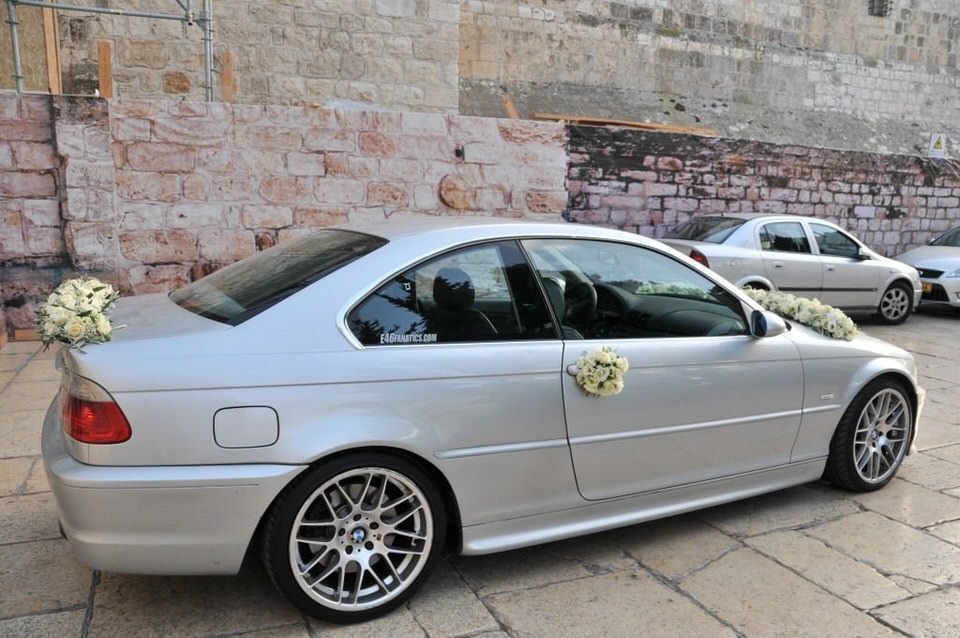 Chruch of the Nativity

But I was looking for Jesus’ manger. I found it with Elias’ help. 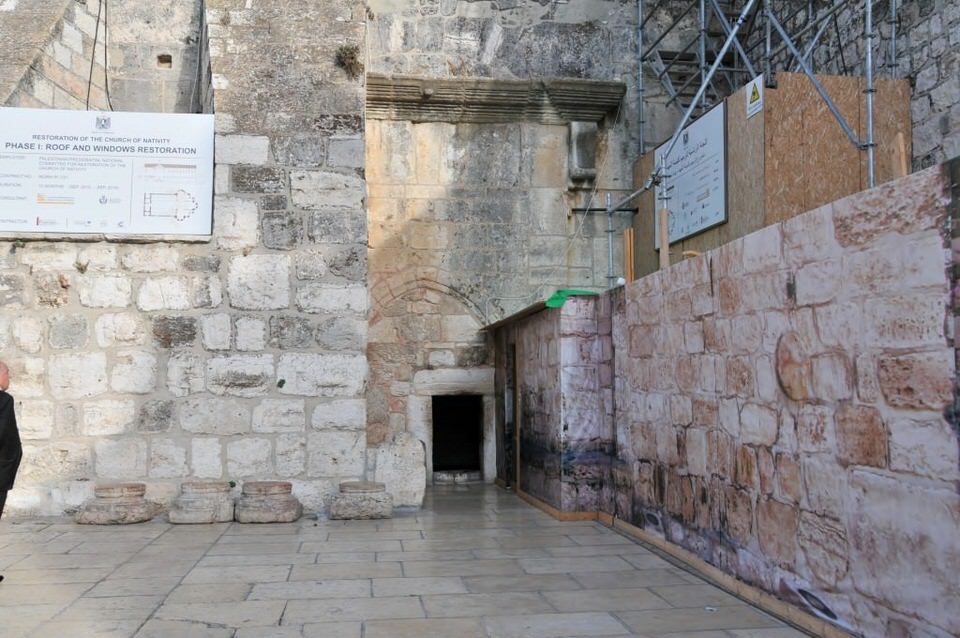 From Wikipedia, I learned that Empress Helena, mother of Constantine the Great commissioned the Church of the Nativity in 327 CE. The church was severely damaged and sacked during a revolt in 529, but was rebuilt a century later by Emperor Justinian I. 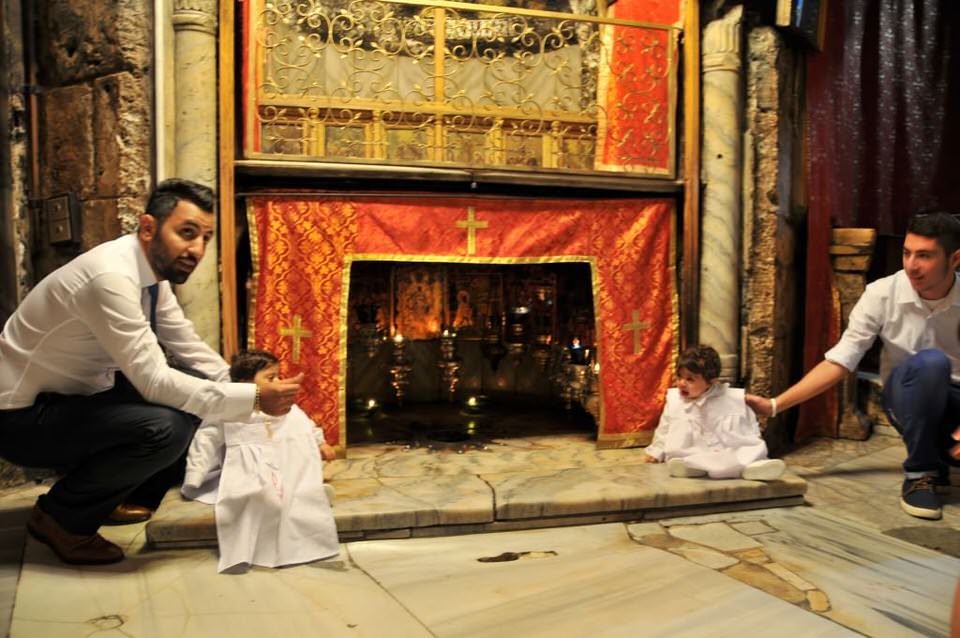 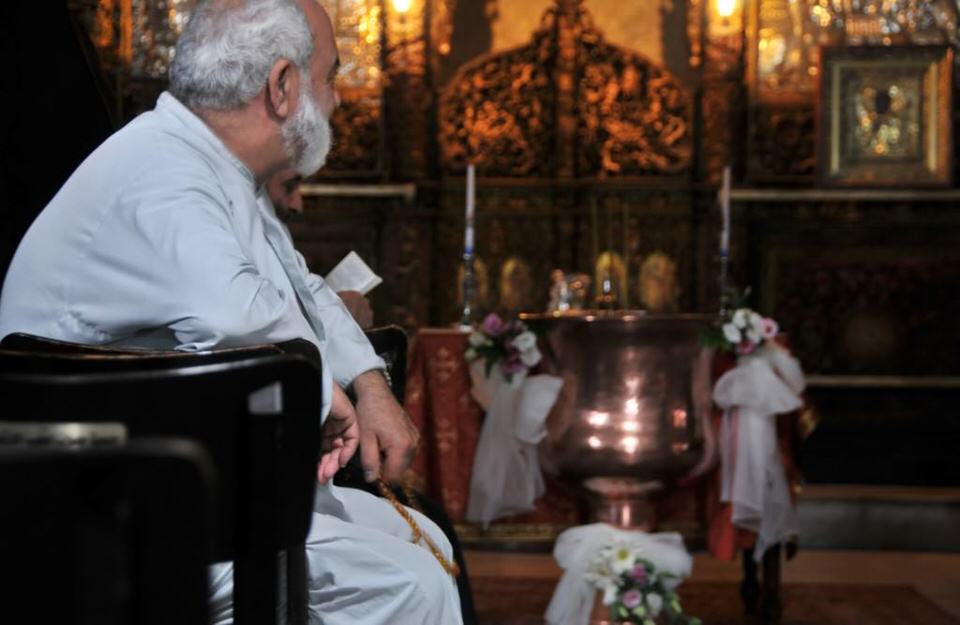 There is a lot to see in Bethlehem, Palestine.

I will show you some more in another article. 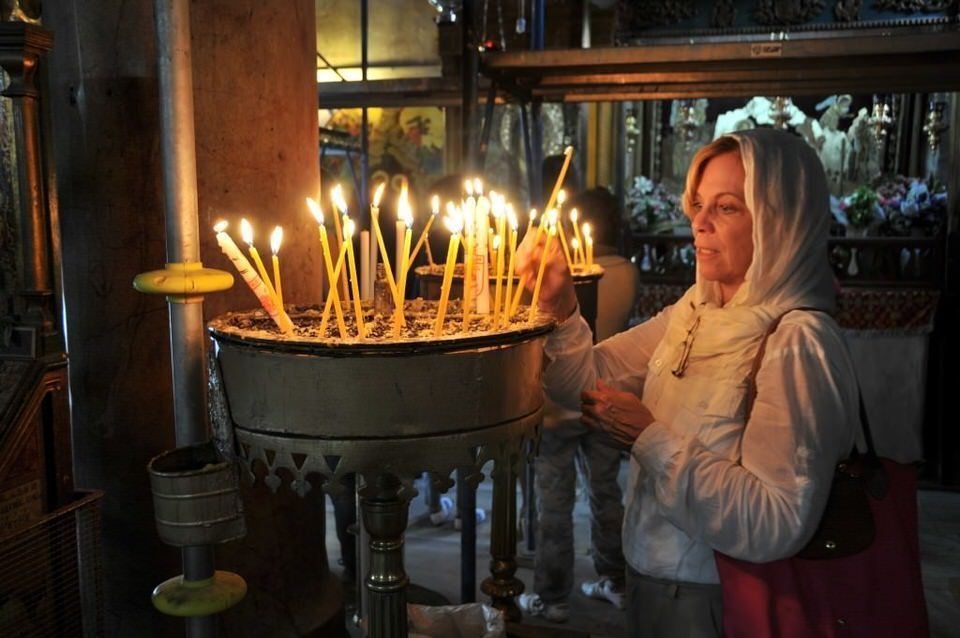 I found the baby Jesus’ manger. Yes, I also saw many people praying. 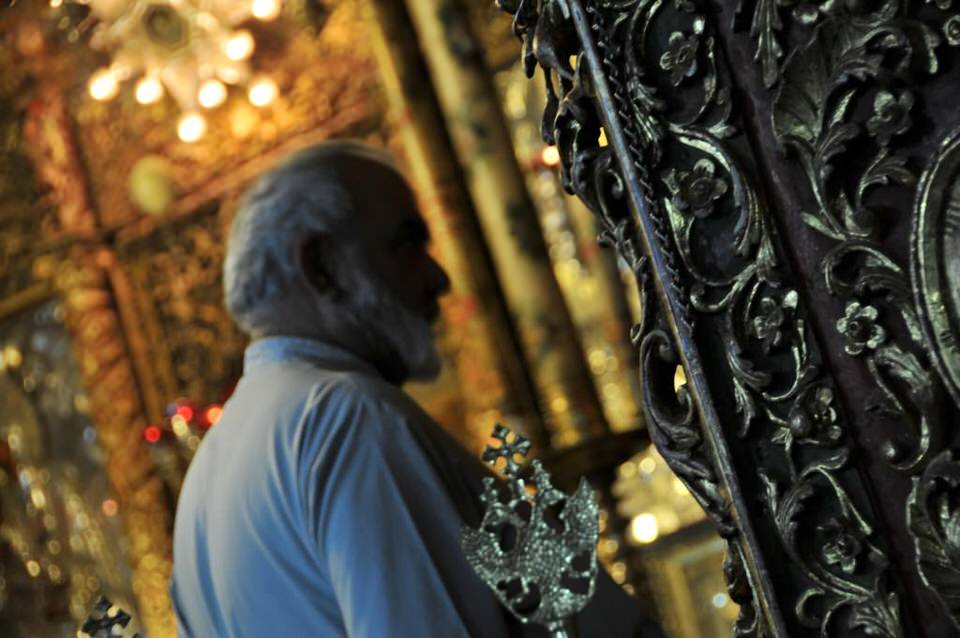 For me, Bethlehem is a sacred site.