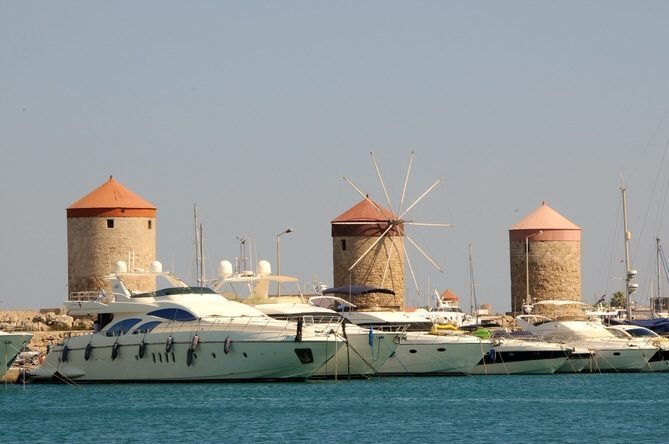 When I think about Rhodes Greece, the Best Sites Rhodes, Greece are probably my two friends, Nick and Stelios. I think about Nick and his cousin Stelios, I always feel happy. Nick Sardelianos lives in Athens and has shown me around his beloved Greece whenever I am in Athens. When I say that, I don’t mean that I’m going to Athens all the time, but, when I go, I always look him up.

When I called him from Rhodes and asked if he could come for a visit, he wasn’t surprised to hear from me.  Nick tried but unfortunately, work called. So he asked if his disc-jockey cousin, Stelios Gerolimos to show me around, Rhodes. Wow-wee – that sounded like a good idea, and it was.

When I think of the Best Sites Rhodes, Greece, the sites were amazing because of the person that showed them to me. The sites were fantastic but the people – outstanding!

Therefore, when I think of Greece, I reflect on the memory of the people of Greece that I met. One of those people is Stellios.

Did you know that Rhodes is owned mostly by Muslims? So given the climate of refugees, and Muslims own most of the island, so it isn’t a problem here.

It is also noteworthy because everyone gets along on this island regardless of religion. Greeks find a way to live in harmony. It is culturally the Greek thing to do.

Rhodes, Greece – It’s about the People!

I walked around old town in the early morning to see the sites in the walled city. We met around noon and drove in his lovely Audi to several of the best places in Rhodes, Greece to see the spots the island is famous for and to enjoy the sunny day. It made a unique experience traveling with a local disc-jockey. Our time was relaxing and very social. He knew everyone it seemed so wherever we went. We stopped to say hello and visit with some of his friends.

The Sites in Old Town Rhodes

I cruised around old town and hung out – this is a super easy place to meet locals and other tourists. You will have a great time here, just taking it easy, shopping and eating.

Shopping and eating in Rhodes, Greece

We met around noon. Stelios suggested we not go to Lindos because it was already too hot and that I could go by bus the following day. So we went to see the other sights on Rhodes.

We started by going to Temple of Apollo and walked around until we found a shady area. We took photos, and he told me the story about this temple. I think it would be amazing to live in a place that has existed for thousands of years; a place so famous people come for their vacation to enjoy the history and culture of the Greeks.

Here is Stelios – as we walked to the beach and along the waterfront.

Churches are everywhere on Rhodes; you can spend days just visiting Rhodes monasteries and churches.

We headed back to the Port where the old Rhodes Lighthouse once stood.

As we crossed the intersection – I looked to the right, he looked to the left. We slowly enter the intersection. The light is green and BAMMM. We hit a taxi. Immediately, the driver hops out and starts screaming at us. I took out my cell phone and started taking photos. I got right in his face. Probably not a smart idea if someone is screaming at me but, I have to admit – I did it. The next thing we knew, we are surrounded by taxi drivers, all defending the taxi driver, who ran the red light.

As is customary in Rhodes, aAfter some discussions – the police are finally called and took a report. Perhaps they have better things to do than reporting traffic accidents.

Scene of the Accident

It just seemed a little noisier than most accidents because everyone wanted to weigh in with their version of the situation, and the crime scene. Everyone talks at once during one of these disputes, and I can’t tell who to listen too. But, since I don’t understand Greek it didn’t matter.

I got out of the car and watched the situation unfold.

Police Asked What I Saw

The car was parked so the men could give their version of the accident scene to the police. The fault doesn’t affect the outcome of the crash and the insurance claim. Insurance isn’t the same in Greece and USA. In Greece, each insurance company pays for the car insurer’s  damaged car. Car crashes are a good reason to have insurance in Greece it seems it’s no-fault insurance, so you can always get your repairs done.

After Our Car Accident

We stopped sightseeing after the car crash happened so Stelios could get ready for work. Probably he also wanted to take a ‘relaxation break’. I walked back to Rhodes front gate which was only a block or two away. Stelios was so calmly working through all of it. I felt very sorry that his car was damaged and deeply appreciated his tour. But fast forward a month later and the good news is that his insurance paid for the repairs.