Best of Hebron, Palestine, Tombs of the Patriarchs Travel 50 plus 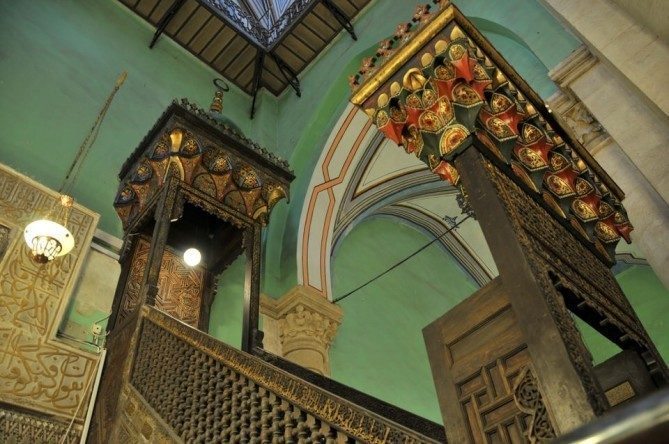 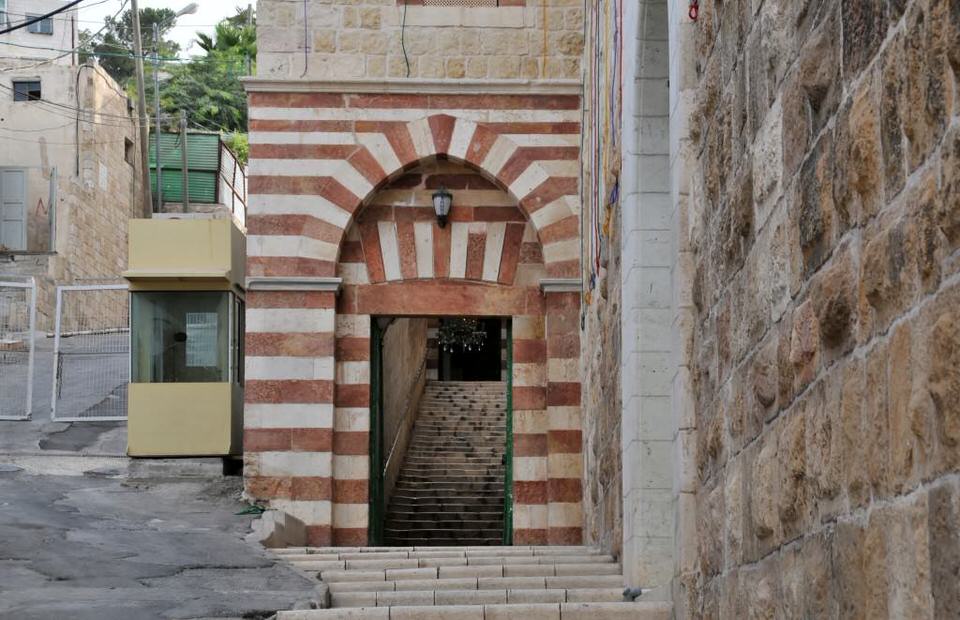 In Genesis, it records that Abraham bought this land in Hebron for his wife Sarah and his burial. Buying property is part of the Jewish and Muslim tradition. 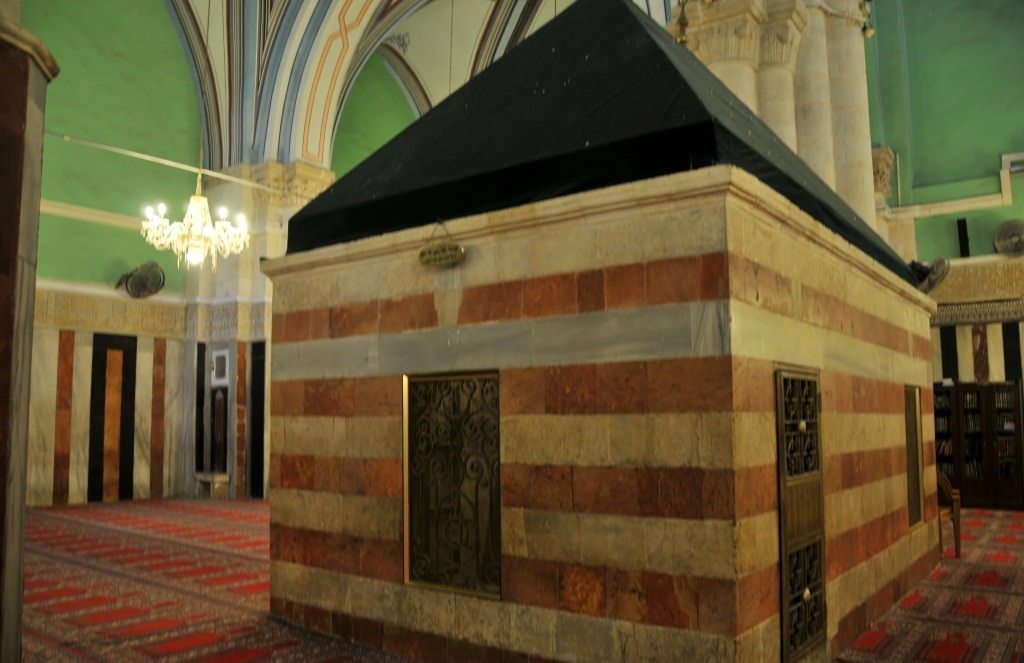 Inside the Hebron, Palestine, Tomb of the Patriarchs

The photos below show the security we went through to see the Tombs of the Patriarchs. 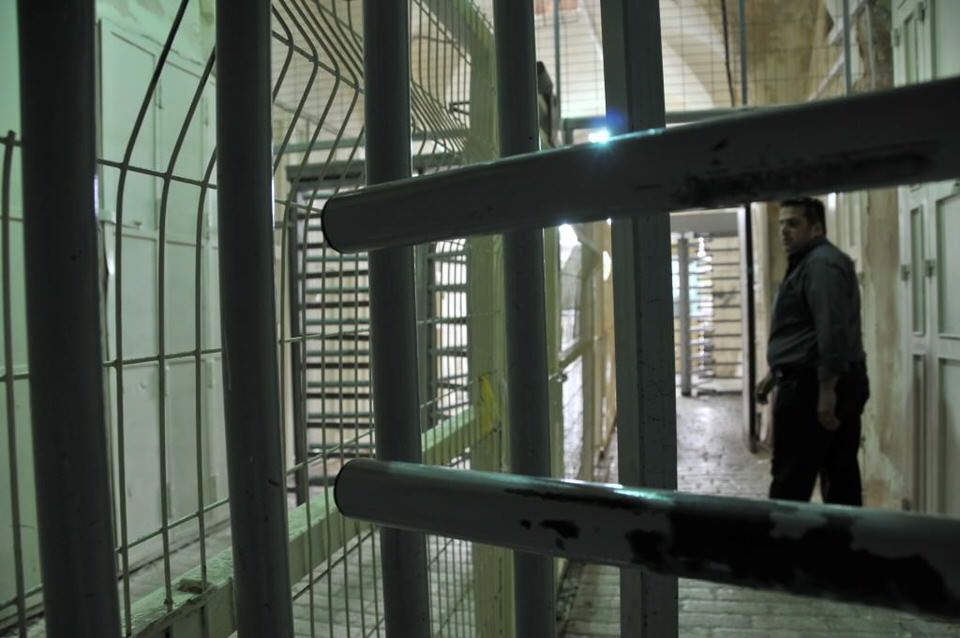 Secured halls on the way to the Tombs 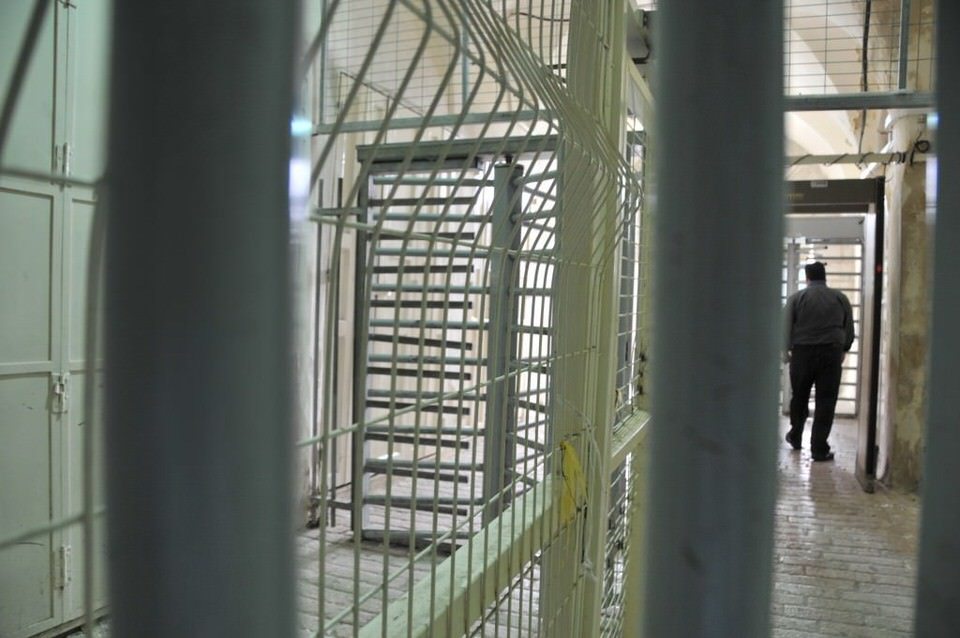 Heavy security on the way to the Tombs

There has been bloodshed and a terrorist bombing in the mosque on this sacred site, so now it’s heavily guarded before the entrance to the mosque. 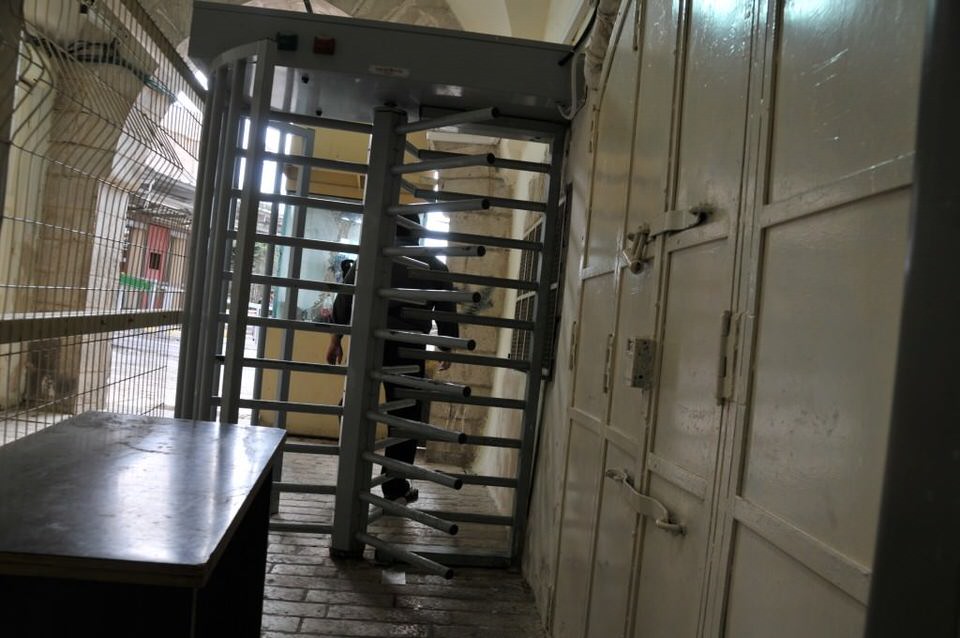 Turnstile at Hebron, Palestine, Tombs of the Patriarchs

My last checkpoint was this guard station. The guard looked at me a little perplexed. 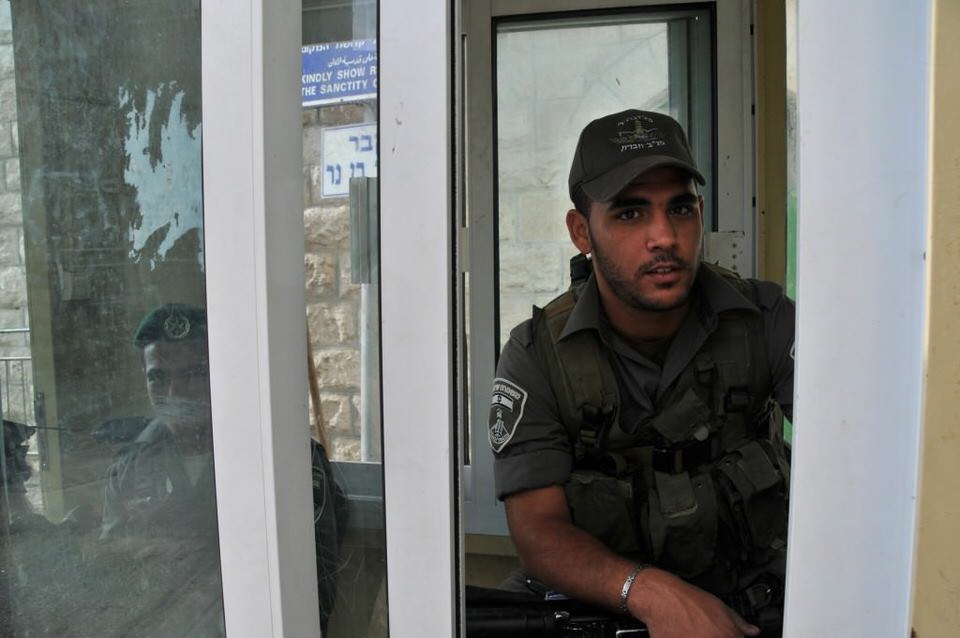 Guards at the tomb at Hebron, Palestine, Tombs of the Patriarchs

The guards didn’t mind having their photos taken. I asked just to be sure. It’s typical for soldiers, police, and guards to turn away or look down when I take their picture, but he looked right at me. My mind, can’t help but recall the girl that I saw walking down the street in Ramallah. I think, but I am not sure that looking down might be cultural in this region of the world. Looking directly into some strangers eyes may be considered forward and not respectful. Maybe the guard was looking back to be defiant and disrespectful to me. Then I thought again about the soldiers, police, and guards I had seen. They always looked down, or away. Perhaps they looked away to protect their personal security and identity. Therefore, like the soldiers maybe the girl in Ramallah looked downward to protect her safety and identity.

I began to walk into the mosque. But, before I did, I had to change my appearance. I completely “covered” my clothing as you can see in the photo below. Covering all my clothing, and my body from head to toe is mandatory to enter the mosque. 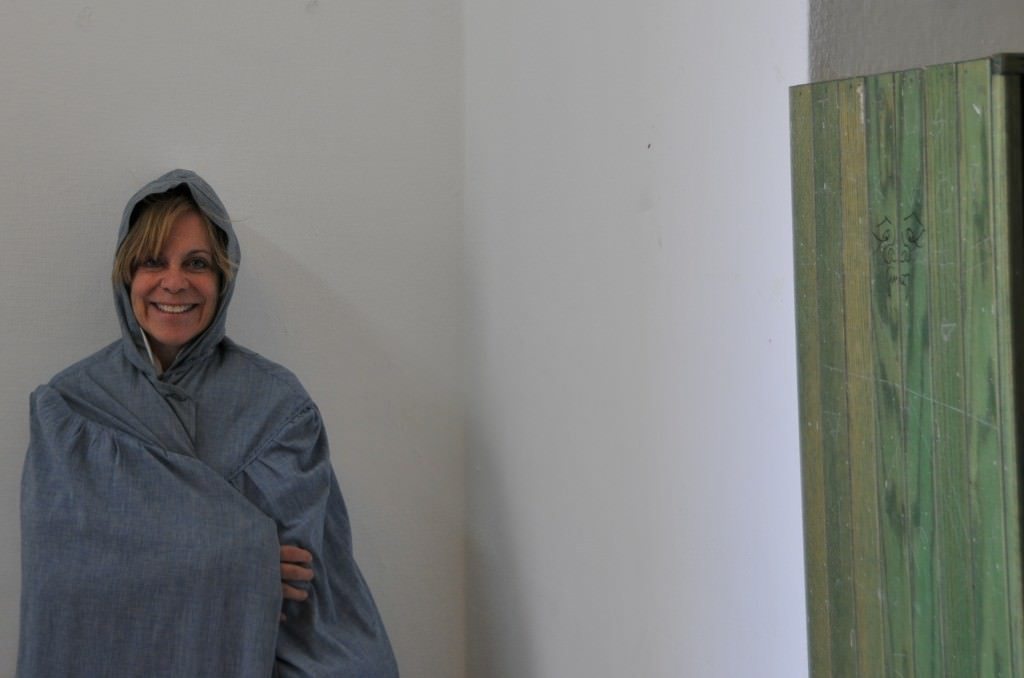 Covering up before going into the Tombs of the Patriarchs

I asked if I had to cover, Elias said, “Yes if you want to come.” I told him it bugged me to wear someone else’s clothing. He shrugged his shoulders signally I was childish. I put on the clothing and entered the mosque. 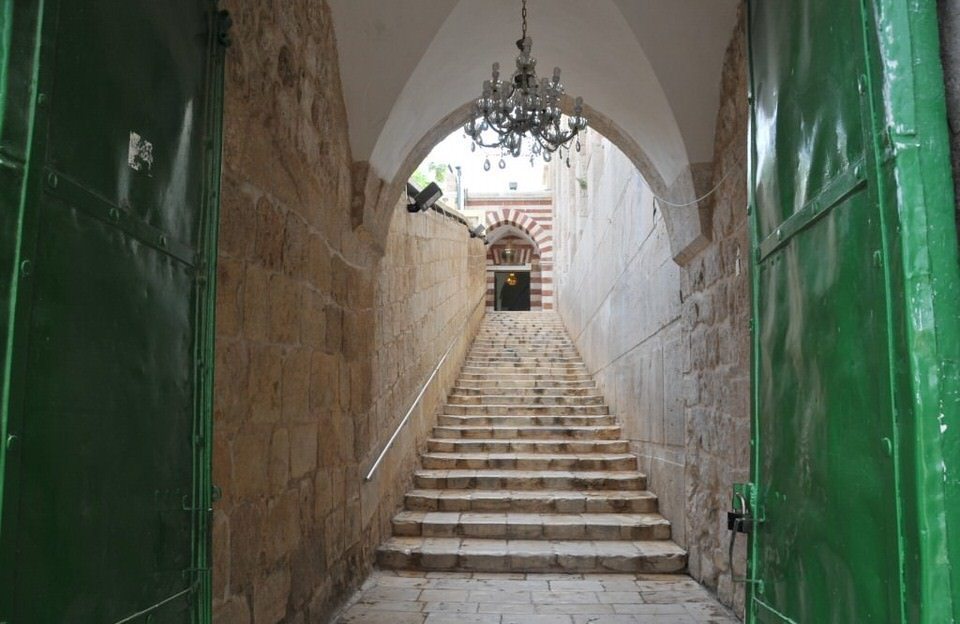 My guide, Elias also entirely covered came with me but waited behind in the hallway. In the center of the main sanctuary were octagonal rooms containing the Centograph for Sarah and the Centograph for Abraham. The Great Mosque contains the Centographs of Isaac and Rebekah. A wide door between these two Centographs leads to the Mosque interior. The mosque is exquisite inside. The entrance area and sanctuary were empty except for me. I spent about fifteen minutes wandering around. There is an elaborate prayer niche pointing to Mecca.

Beside the prayer, niche is a carved and inlaid pulpit made in 1091 for a mosque in Ashkelon.

The wooden carved prayer niche with precious inlaid woods built in 1091 for a mosque in Ashkelon. A century later, Saladin the first Sultan of Egypt and Syria burned the city of Ashkelon. Before he burned the town, he rescued the pulpit and brought the precious artifact to Hebron for the Great Mosque.

Painted and tiled walls decorate sections of the interior walls in beautiful geometric designs following the traditions outlined in the Koran. Human images are forbidden, so no human images are found in this mosque or any mosque. The distinctive floral design points upward making the room feel larger than it is. 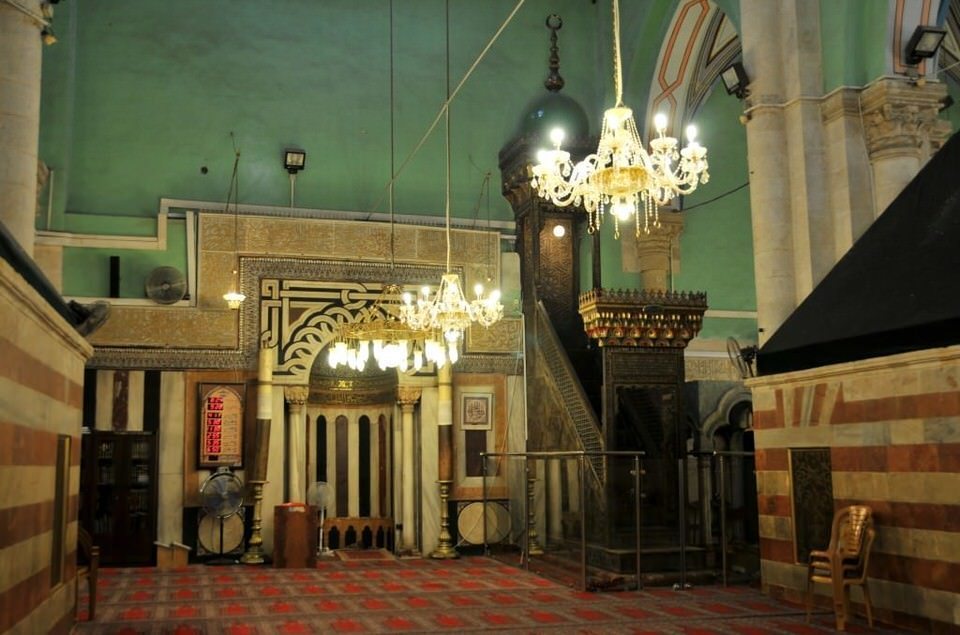 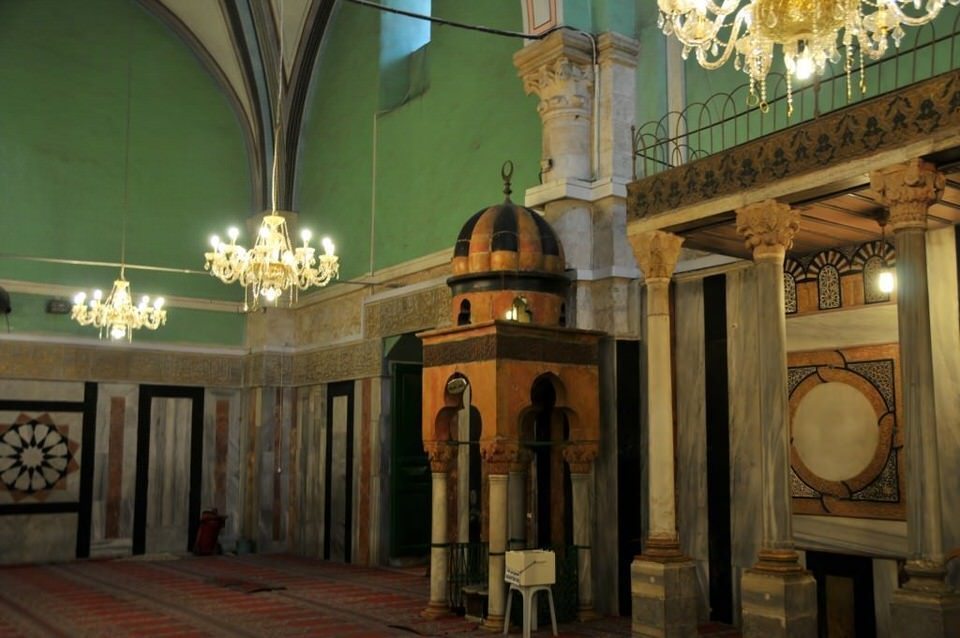 Grace and beauty inside the mosque 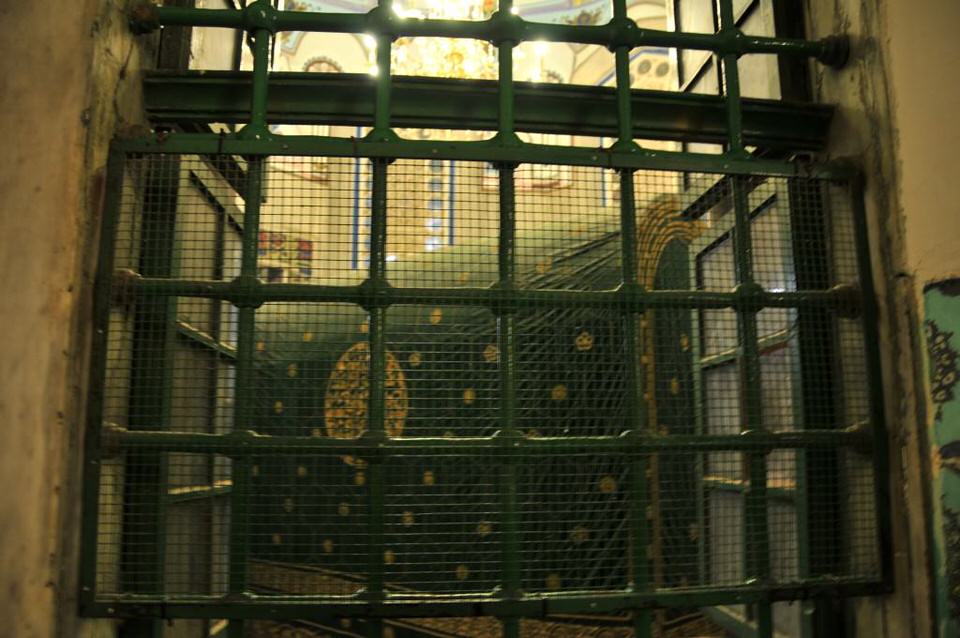 Secured window at the mosque at the Tombs of the Patriarchs

Alone in The Moment

Alone in the mosque, I felt lonely and alone. Entirely alone at this moment, I just tried to be present – it was quiet. But this moment felt so empty because I think I felt a little scared. Then Elias came in to the Mosque. Comforted by his presence, I wandered a bit more. Most tourists don’t visit the Tombs of the Patriarchs. A location, a little hard to get to, off the beaten track which may explain why it is so empty. But it doesn’t explain why I felt so lonely and alone. Tombs of the Patriarchs, the number two most sacred place in Islam was where I felt alone. (Mecca is the holiest site, and the Dome of the Rock, which I couldn’t enter is number three.)

Tourist may be afraid to visit Muslims sites. I find ‘the road less traveled’ makes my trip a journey. My journey became a unique experience and moment in time, and a unique cultural experience. I wasn’t converted but learned about my Christian values, traditions, and about a culture that was different than mine, all by visiting one place. Rarely visited, you most likely will have the site all to your yourself. Let me know how you feel when you visit or if you have visited Tombs of the Patriarchs.

One of the Actual Tombs 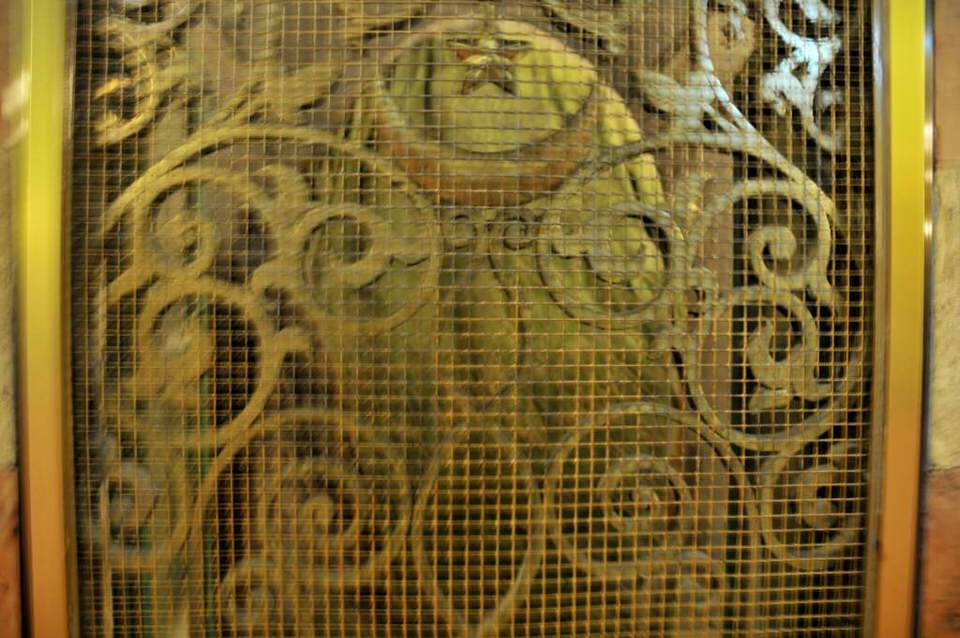 A coffin at Hebron, Palestine, Tombs of the Patriarchs 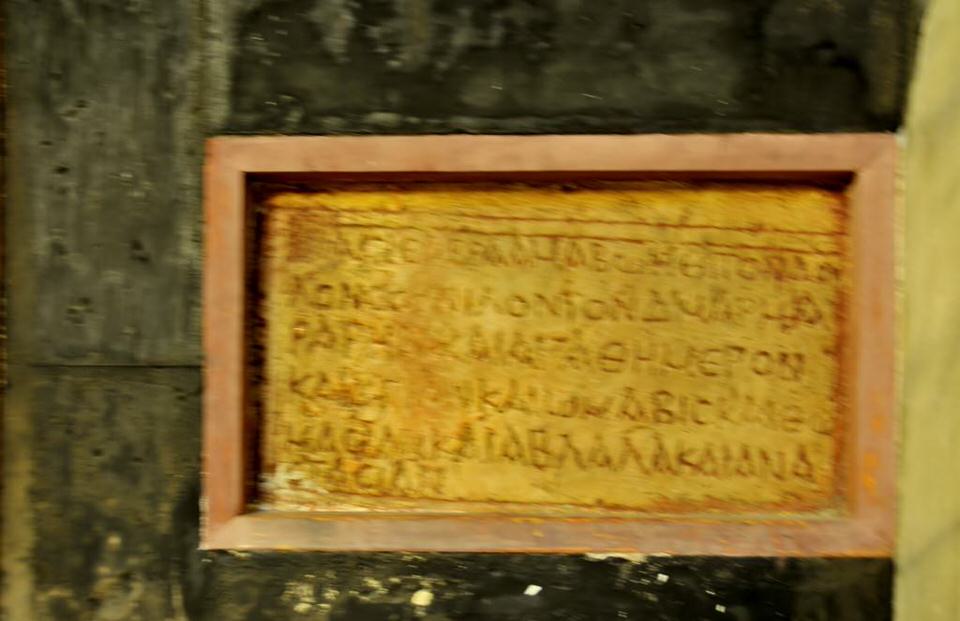 Ancient writing in the Cenotaph of Isaac 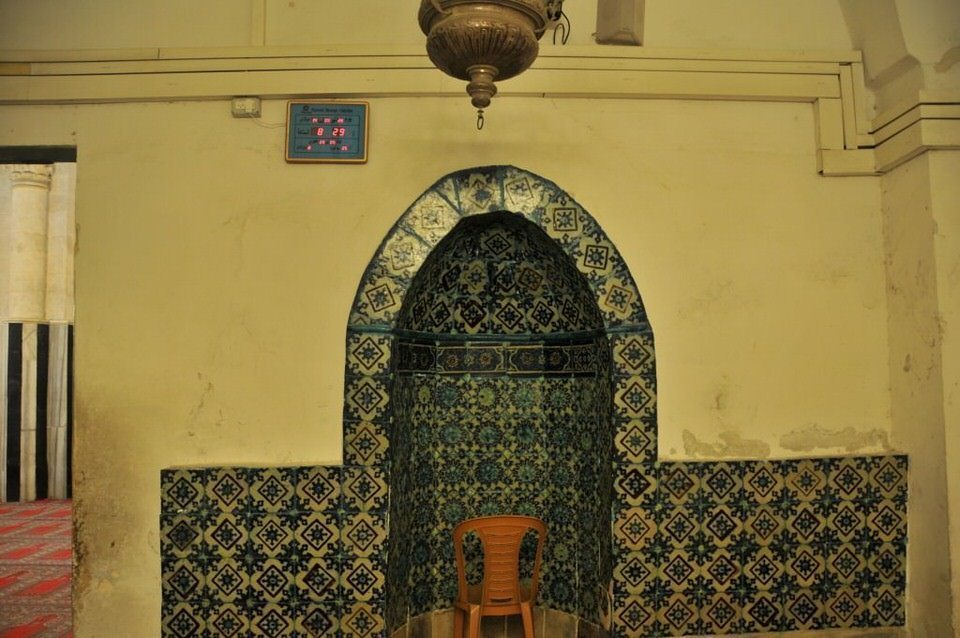 Jewish People May Visit on Ten Days Each Year

In the Bible, Abraham the Father of the Muslims and Jews is here. Therefore, they share Abraham’s burial place. I thought it would be like Mother Mary’s home – shared and used jointly. However, this wasn’t and isn’t the case. Ever since an Israeli suicide bombing at this site, the sanctuary, divided into a Muslim and Jewish side seems creepy. Jews are not allowed to visit the Muslim side except for ten days each year. Christians can visit the Muslim or the Jewish side at any time. So Muslims and Jews sharing the burial site may not happen in my lifetime. 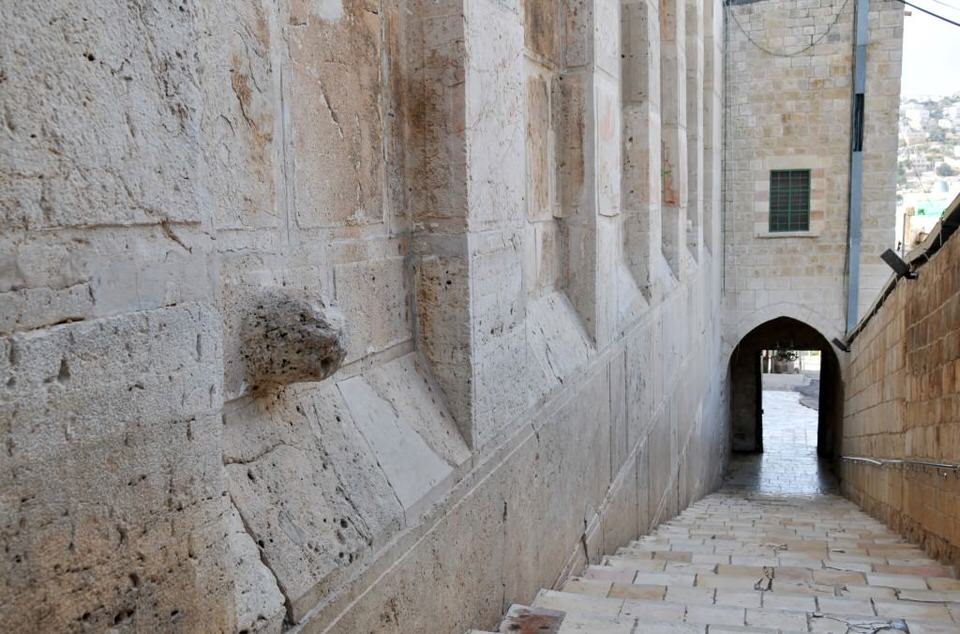 The mosque site of the Tombs of the Patriarchs

The Muslim side was very ornate and provided easy access to the Tombs. It was time to see the other side. 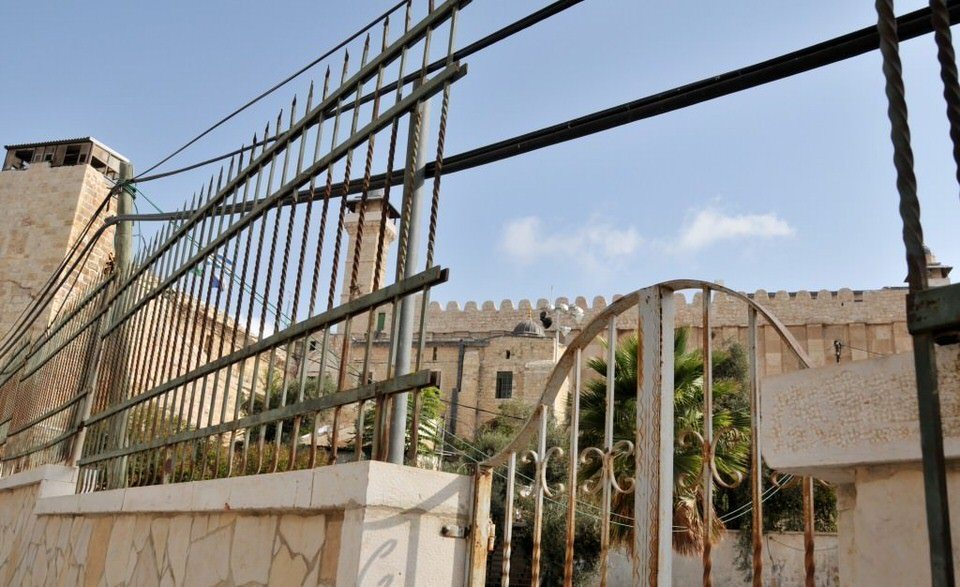 Gates at the Tombs of the Patriarchs

We walked on to the Jewish section of this holy site.