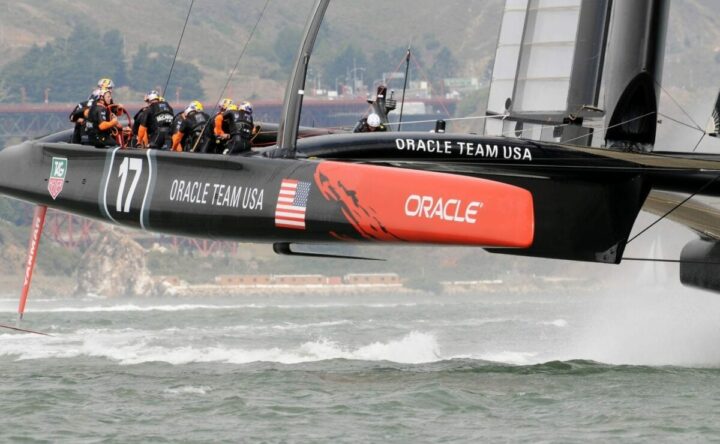 Looking back at 2009 and 2013 America’s Cup, the official statement is below, but the race was more than a formal announcement. The 2009 race was the last America’s Cup for mono-hulled yachts. 2013 marks the beginning of mega spending, mega yachts and mega organization to win the Cup.

The 34th America’s Cup was a series of boat races held on San Francisco Bay. The defender Oracle Team USA representing the Golden Gate Yacht Club, and the challenger Emirates Team New Zealand representing the Royal New Zealand Yacht Squadron raced for the 2013 America’s Cup. Oracle Team USA defended the America’s Cup by a score of 9 to 8. Some say this sailboat race was the greats sports comeback of all times. Some say it was the biggest upset in sports history. Regardless, it was magnificent, significant, and an expensive sailboat race. Source America’s Cup.

Looking Back at 2009 America’s Cup

In 2009 things were different in the USA and at the America’s Cup in Valencia, Spain. The boats in Valencia were smaller and less elaborate. The yachts had only one hull and followed different racing rules.

The Media Boats for the media, and photographers look still look the same. What has also remained the same over all these years are the deep relationships the regatta creates. I am still friends with all the people I met in 2009 and again joined in 2013. 2014 will be the first time I have missed the regatta in 8 years.

When I think of the America’s Cup race, it brings me back to my honeymoon in Newport, Rhode Island where I met Team New Zealand and Australia for the first time. At that point, when my soon to be husband and I were dating. He was working for a spot on Dennis Conners America’s Cup yacht. After years of chasing sailboats all over the world, it had come the time for me to stop. I explained to my future husband that one more sailboat race wasn’t in the cards for me. In those days, your husband or boyfriend raced and the women tagged along. We were also spending every penny we had chasing this dream. Men weren’t paid to sailboat race, it was a gentlemen’s sport. Now men are paid as much as football players.

After years pursuing sailboat regattas in Mexico, Canada, the USA and beyond, I wanted to stay home.

To my surprise, my husband gave up sailboat racing. Giving up sailboat racing at a “professional level” was our fatal error. Men shouldn’t give up what they love to do. Especially, people can’t give up what they are meant to do. I don’t think he was ever happy because he didn’t get to compete at this exceptional level. Instead, he quit racing and asked me to marry him. He gave up his sail makers job and became an investment banker. With no experience other than a

He gave up his sail makers job and became an investment banker. With no experience other than a Rolodex contacts, and a friend helped him get a job, he passed a series of tests. He went into the brokerage business. He is still there today. But, our relationship was doomed the moment he did that.

My mother planned our honeymoon to the great ports of the east coast. We went to Newport, Rhode Island, New York City for the 100th anniversary of the Brooklyn Bridge, to Boston Harbor, Martha’s Vineyard and Nantucket. A perfect honeymoon, but it reminded him of what he gave up. The first time I went to an America’s Cup was on my honeymoon. He saw his friends and I think he longed to follow his dream. He never complained or acted resentful then but over time, resentment finds some very stranger harbours. 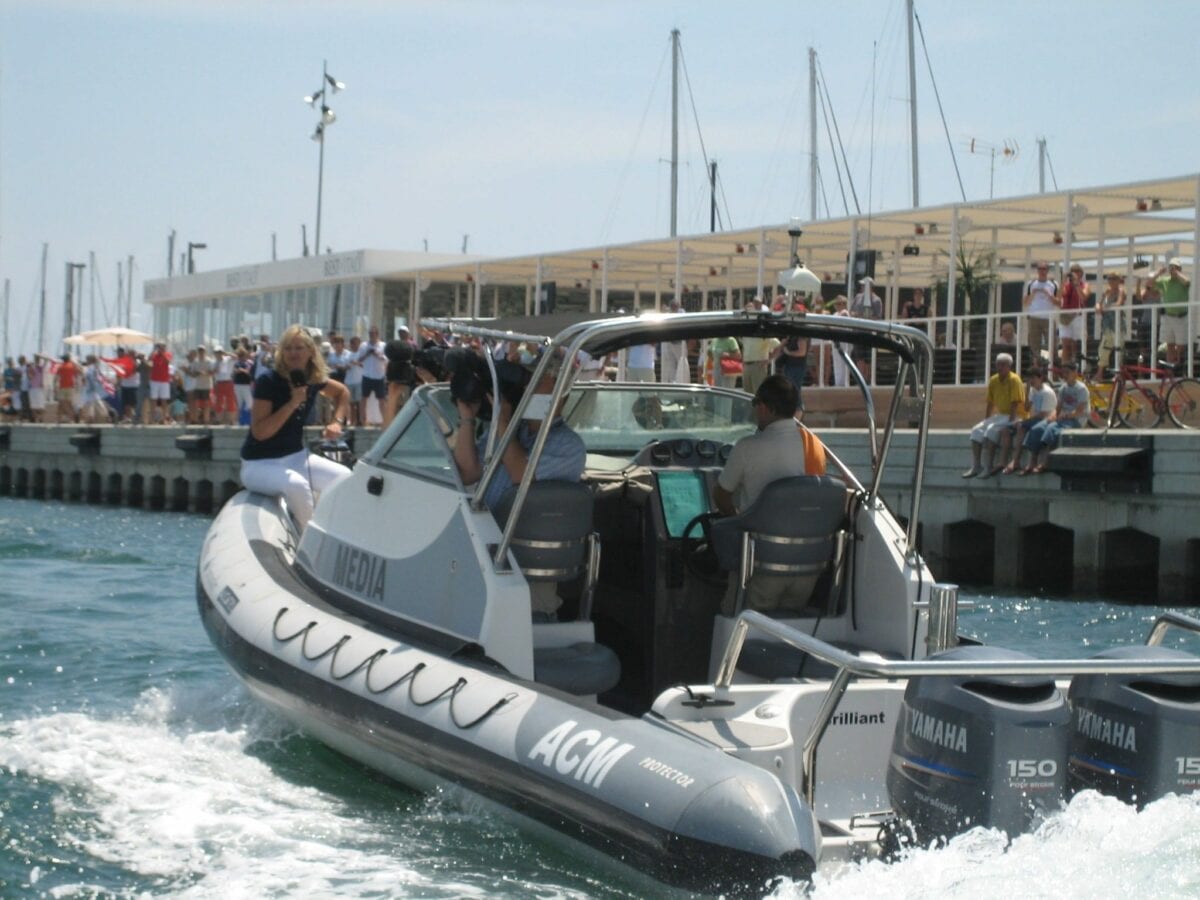 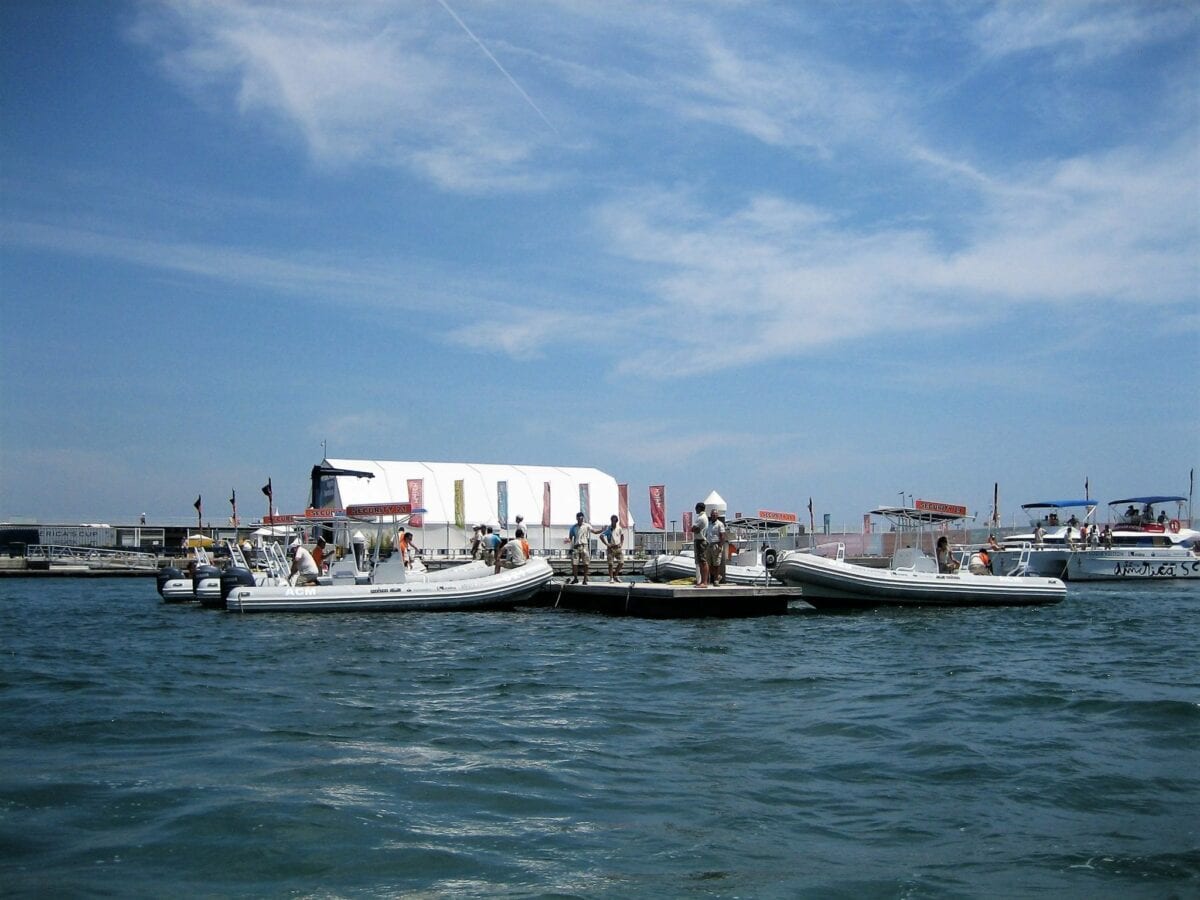 The press boat is much bigger than the photographer’s media boats. The photo boats have to be able to zip around the race course and chase the Americas Cup yachts. They went about 15 knots.

The team boat, like the one in the photo below, is Alinghi’s team chase boat. The press boat is larger than Alinghi chase boat and holds about 45 people. 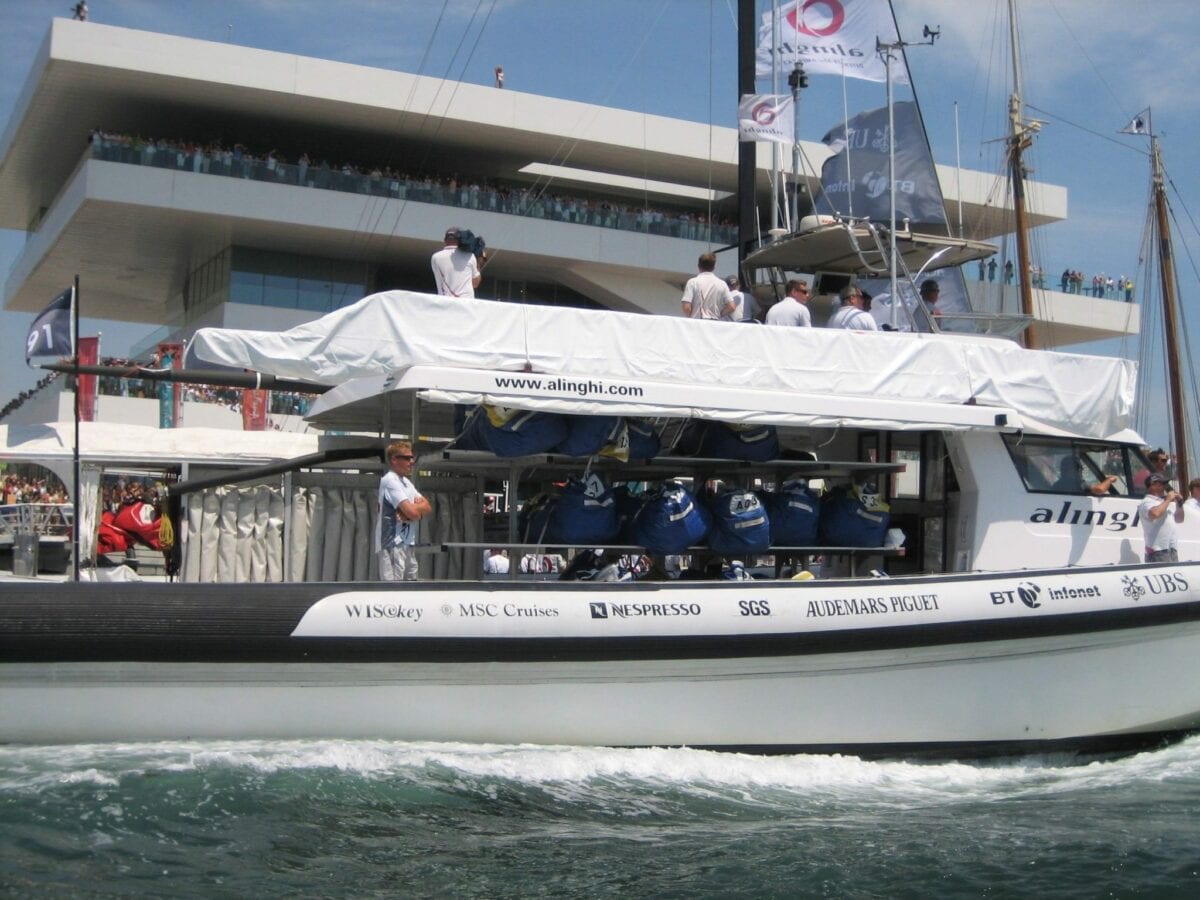 Looking back at the America’s Cup Boat, the yachts that race in 2009 – look very different than this year or in 2013. Below is Alinghi (one of my favorite boats, and my all time favorite Emirates Team New Zealand (ETNZ.) The yachts in Valencia, Spain, smaller and mono-hull (one hull boat, see below) are very different compared to today’s America’s Cup boats. Now, catamarans or multi-hull yachts that are state of the art, requiring sailors athleticism and big bucks to win the regatta.

Now, catamarans or multi-hull yachts that are state of the art, requiring sailors athleticism and big bucks to win the regatta. 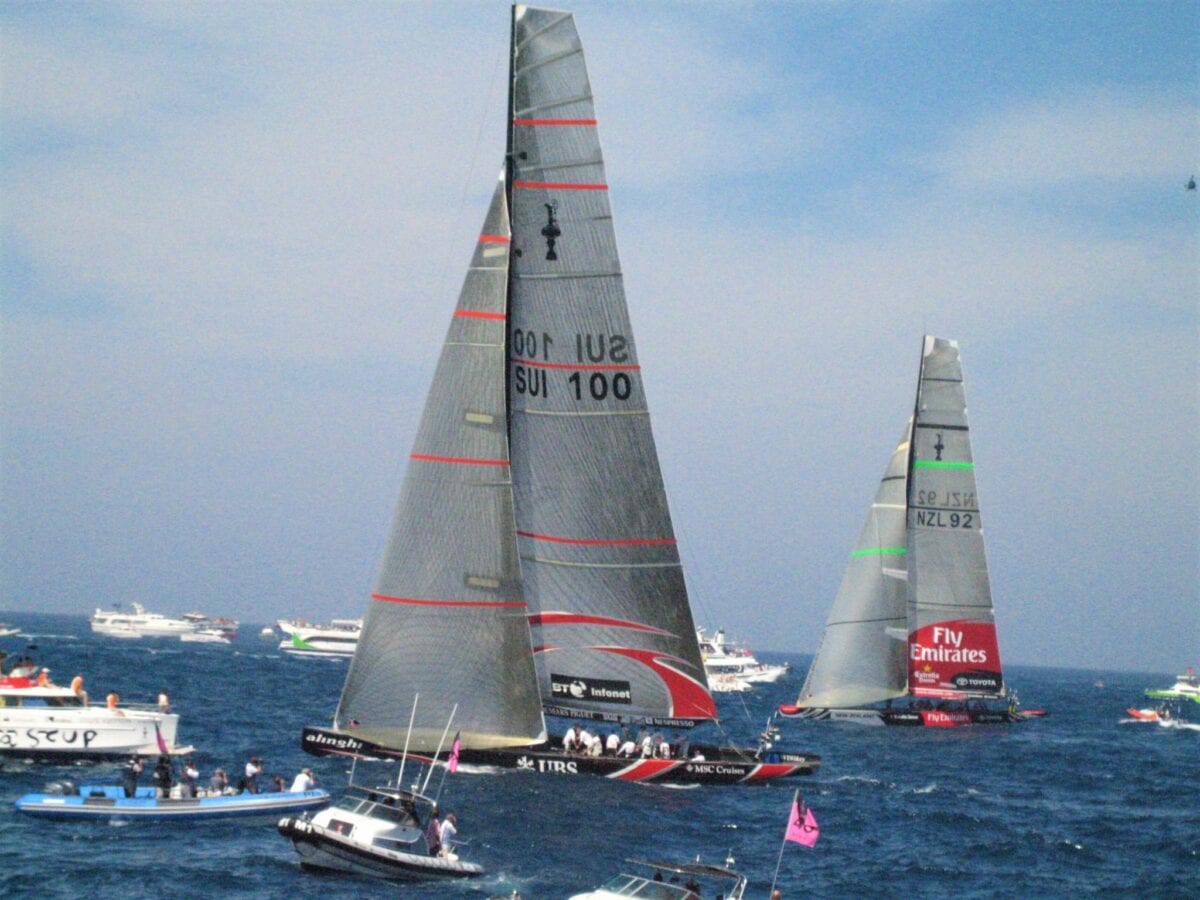 The boats looked like this in 2009 at the America’s Cup. 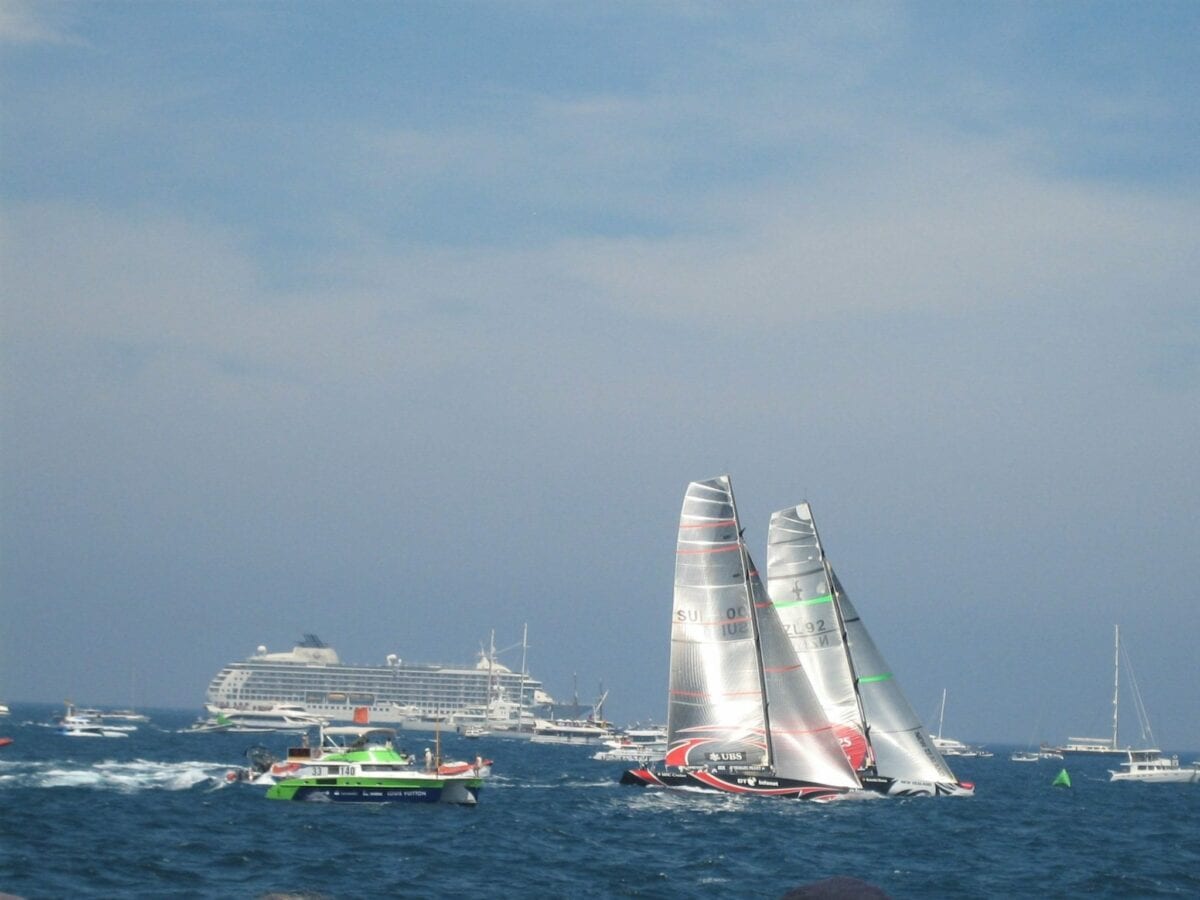 America won with a striking comeback. Some say it was the greatest comeback of all times because Emirates Team New Zealand won the first eight races. Oracle came back and prevailed in nine straight races. Perhaps it indicates the advent of winning at all cost, beating the rules, spending exorbitant amounts of money, and uniquely using technology?

Perhaps it indicates the advent of winning at all cost, beating the rules, spending exorbitant amounts of money, and uniquely using technology? 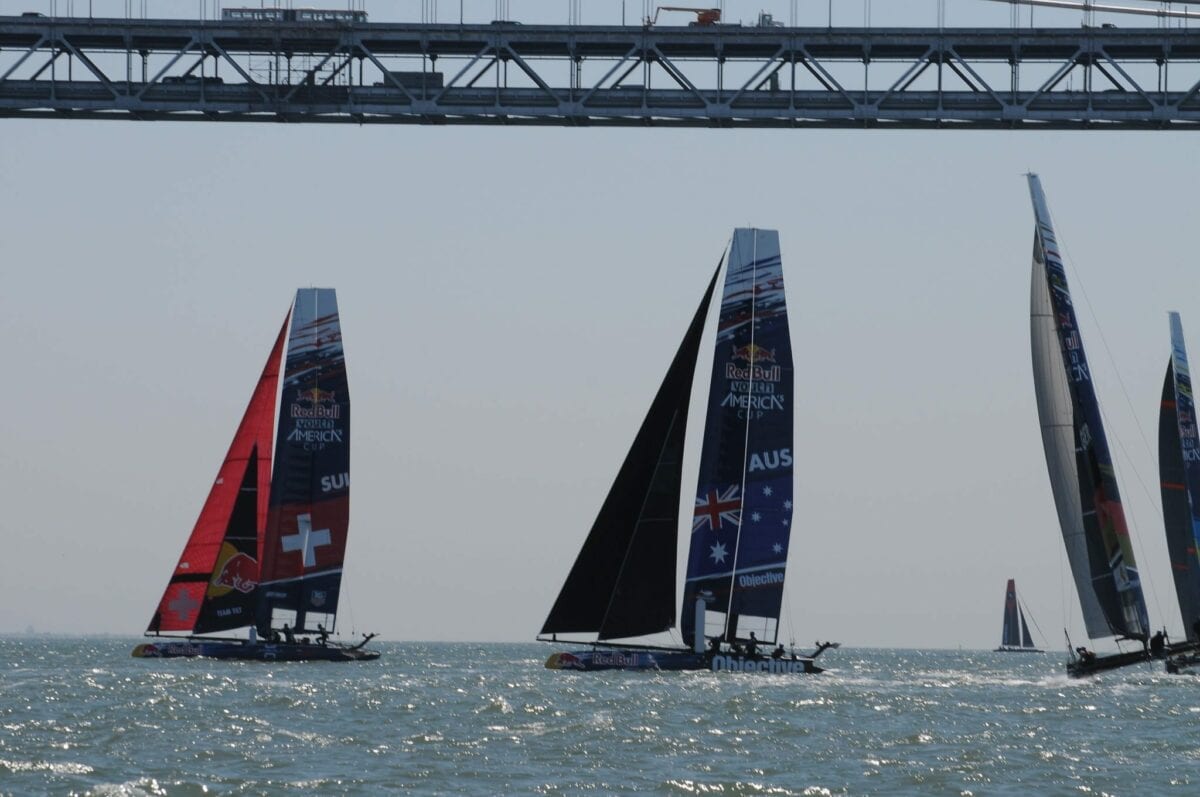 Since I am looking back at the 2013 America’s Cup, I believe this regatta and this spectacular sailing event pushed all boundaries of sailboat racing. No longer would there be the limits of speed, athleticism, and money. New challenges will face the future Cups.

This event is one of the most expensive in the sports world. The cost also limits the success of some teams. Teams aren’t equally funded. If not full-funded they won’t have the resources to adapt to the rules as the race progress. Rules change, as they do over the years leading up to the final America’s Cup regatta. Today’s America’s Cup is a whole new game because of the money.

At this level, money, money and more money wins sailboat races. Oracle had the money to make minor changes “within the rules” throughout the regatta which gave them the winning edge. It gave them the ability to come back from a 9 – 8 deficit and to become the ultimate winner. 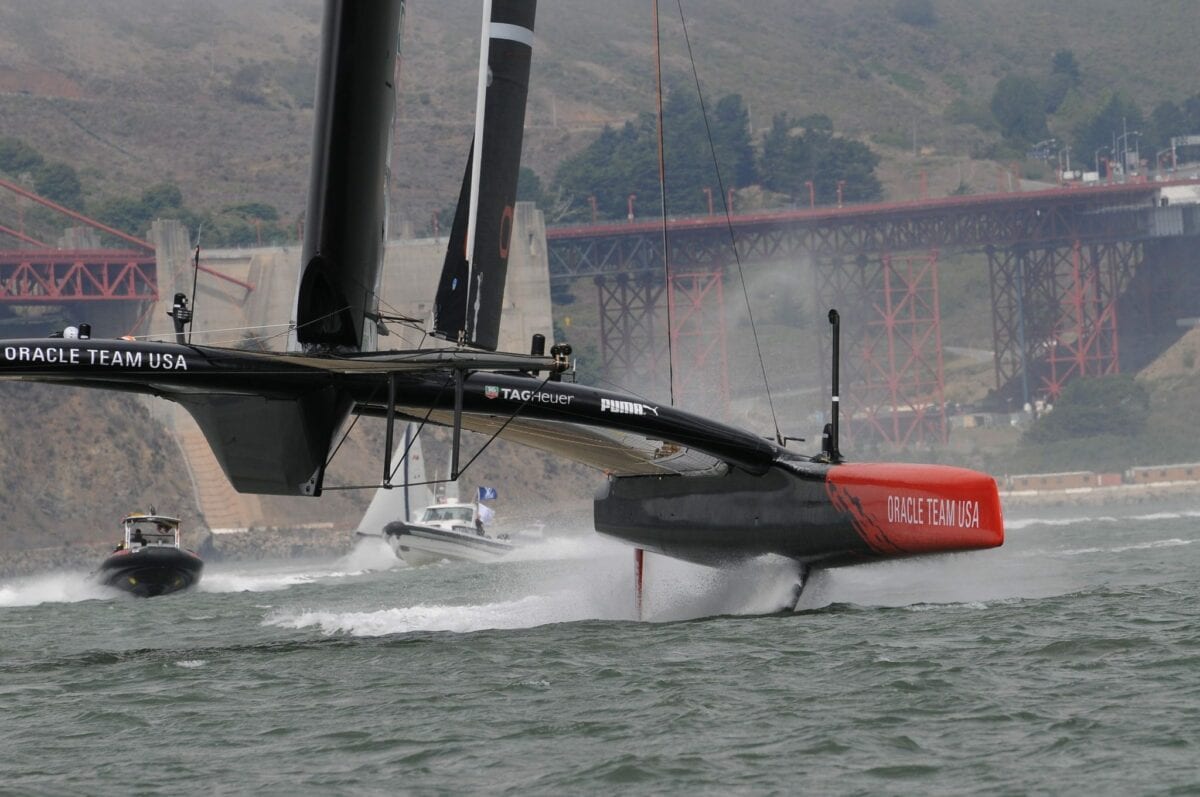 As the winner of the last regatta, Oracle Team USA, the defender, sets the rules per the terms of the racing charter. But this year, the defender has an even greater favor to win again because of the investment and rule changes during the trials. Therefore, the future defender of the Cup will most likely remain in Oracle Team USA favor. So it was the upset of all upsets when Team New Zealand won. This time, Oracle couldn’t come back and only won one race. 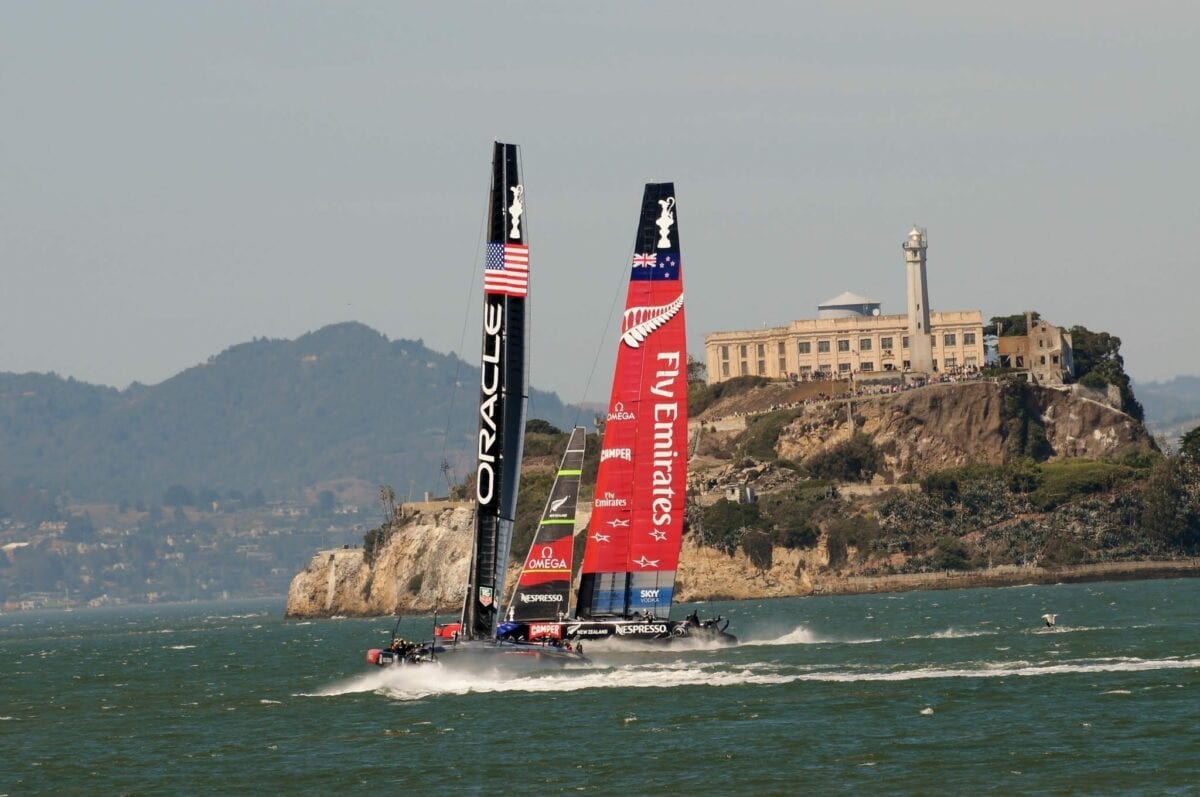 Spectacular sporting events are all in the eye of the beholder. Was it the greatest sports upset or something else? You decide. As I say, it’s up to you, but I think the upset was about big money. What I can tell you as someone who was part of the media team, an artist, and photographer – it was the most visually exciting sporting event I have seen. The Wall Street Journal explains the situation at the Cup.

The summary of this racing story is winning at all cost. Regardless, Oracle achieved the win and now gets to set the rules. I can’t explain the comings and goings of the Cup. However, I can show you what I experienced at the 2013 America’s Cup, my second time attending as a media team. 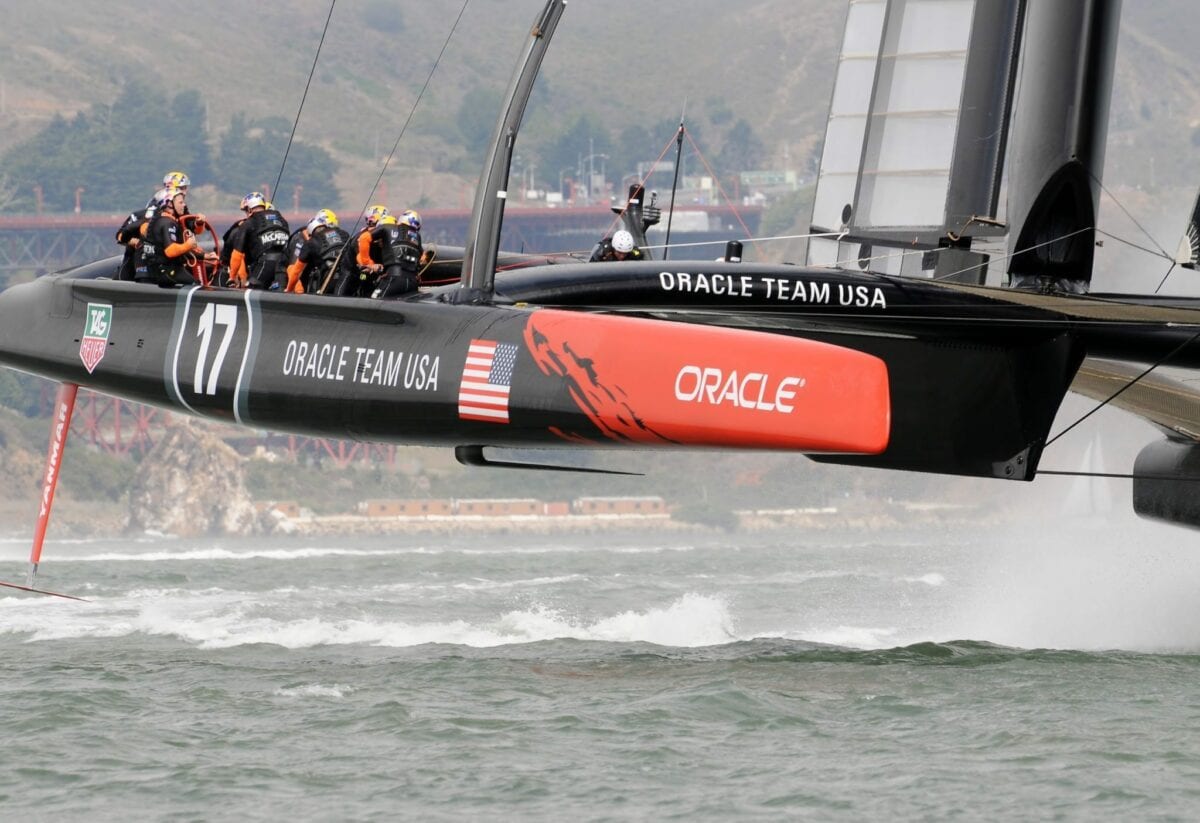 At the Americas Cup, it’s about relationships, friendships, and trust as you work every day in very close quarters in the media center or on the boats. Women are welcome as part of the press team, as photographers, writers, and press. Not surprisingly, I believe some of the best photographers I have ever met. 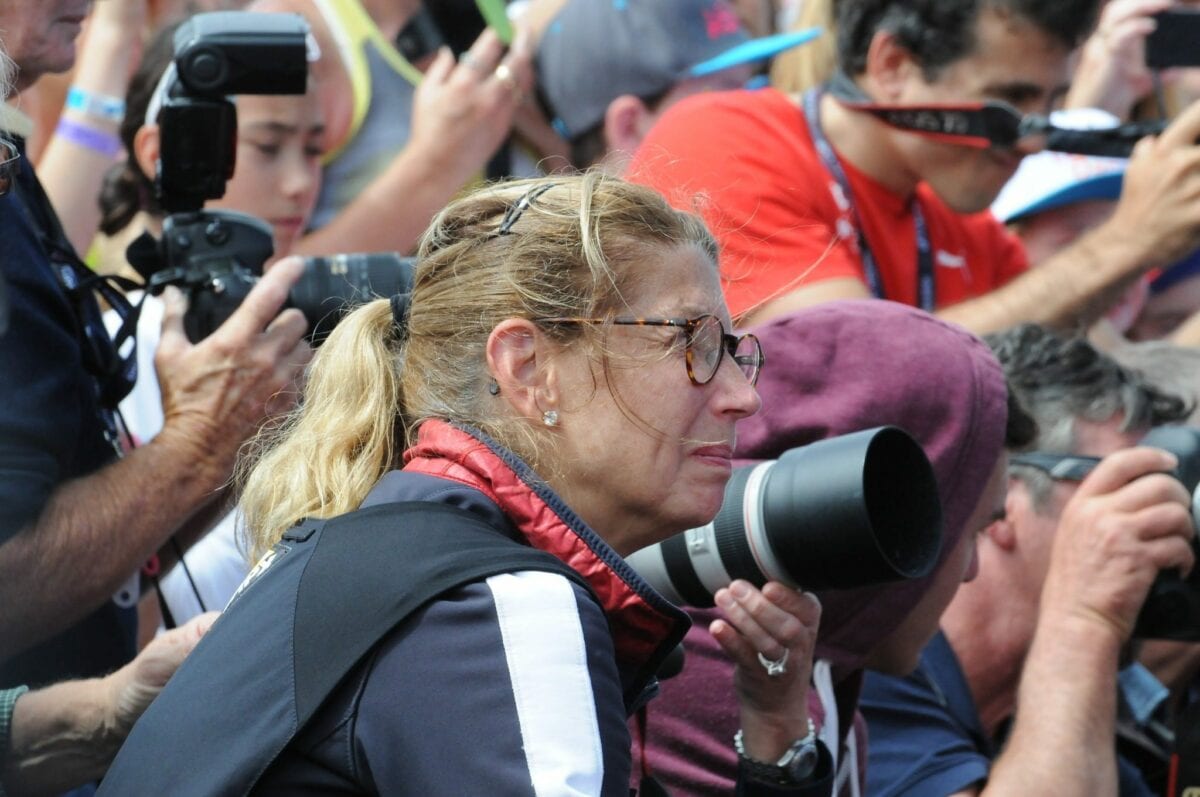 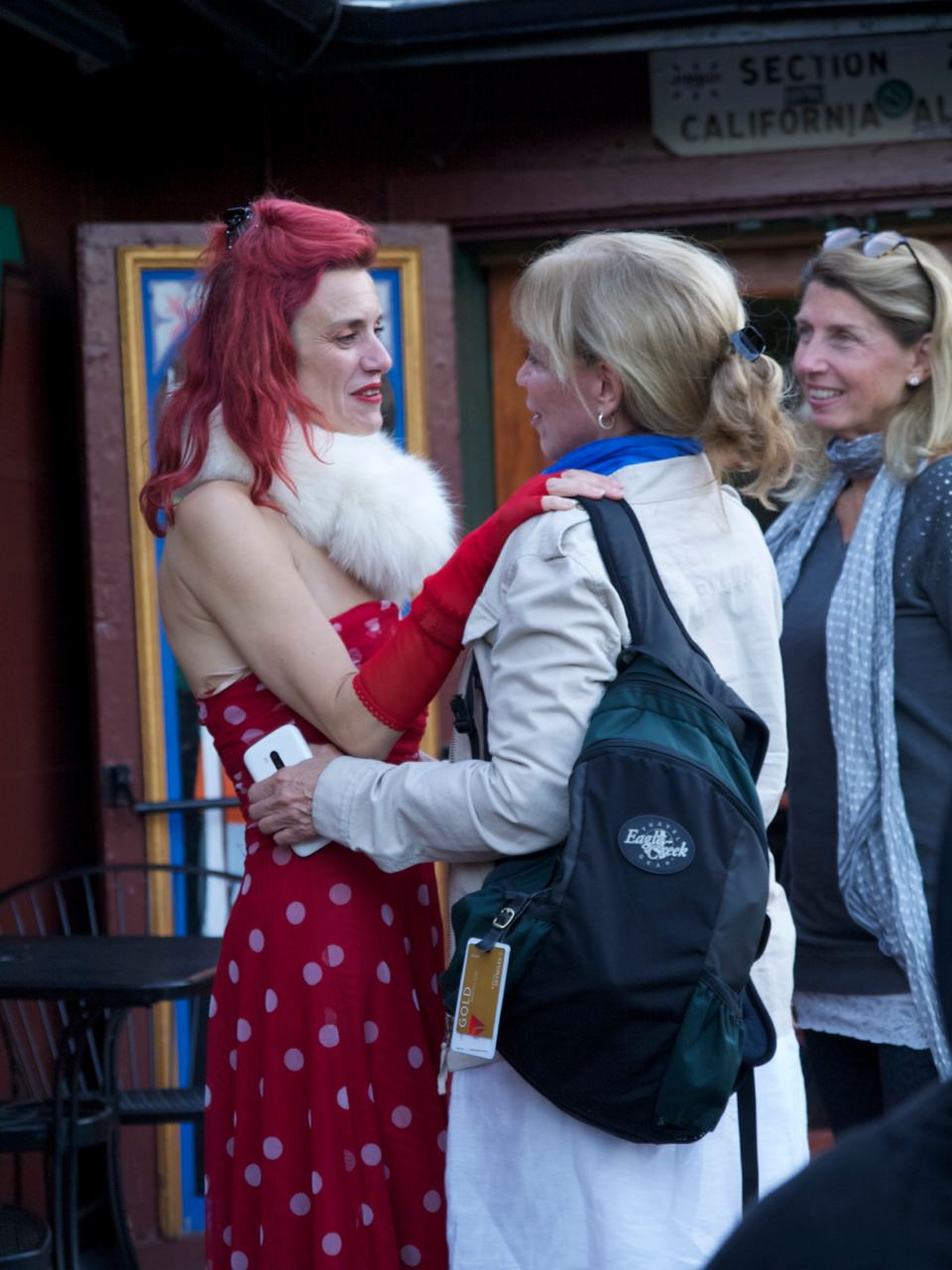 Kate, and photographer Linda with ballerina Isabella. (I tell how we meet in the next story) Oh yes, by the way, this is me in the photo! 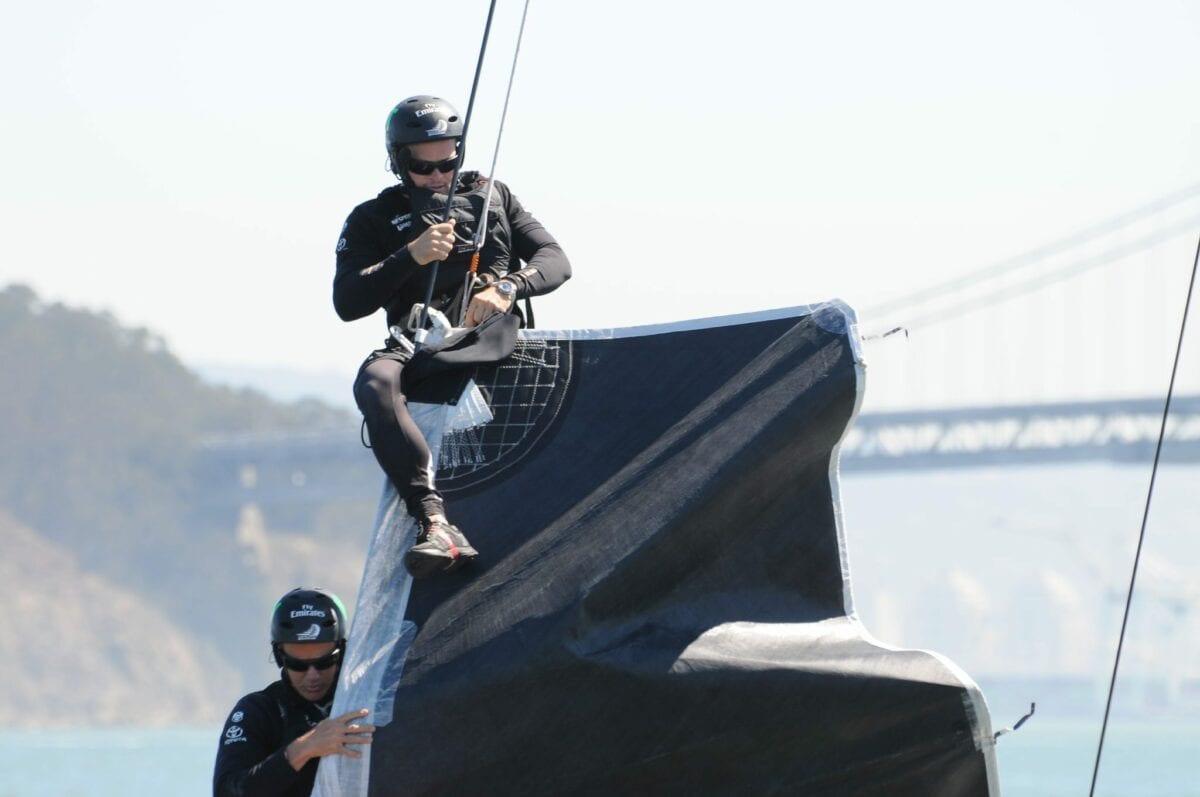 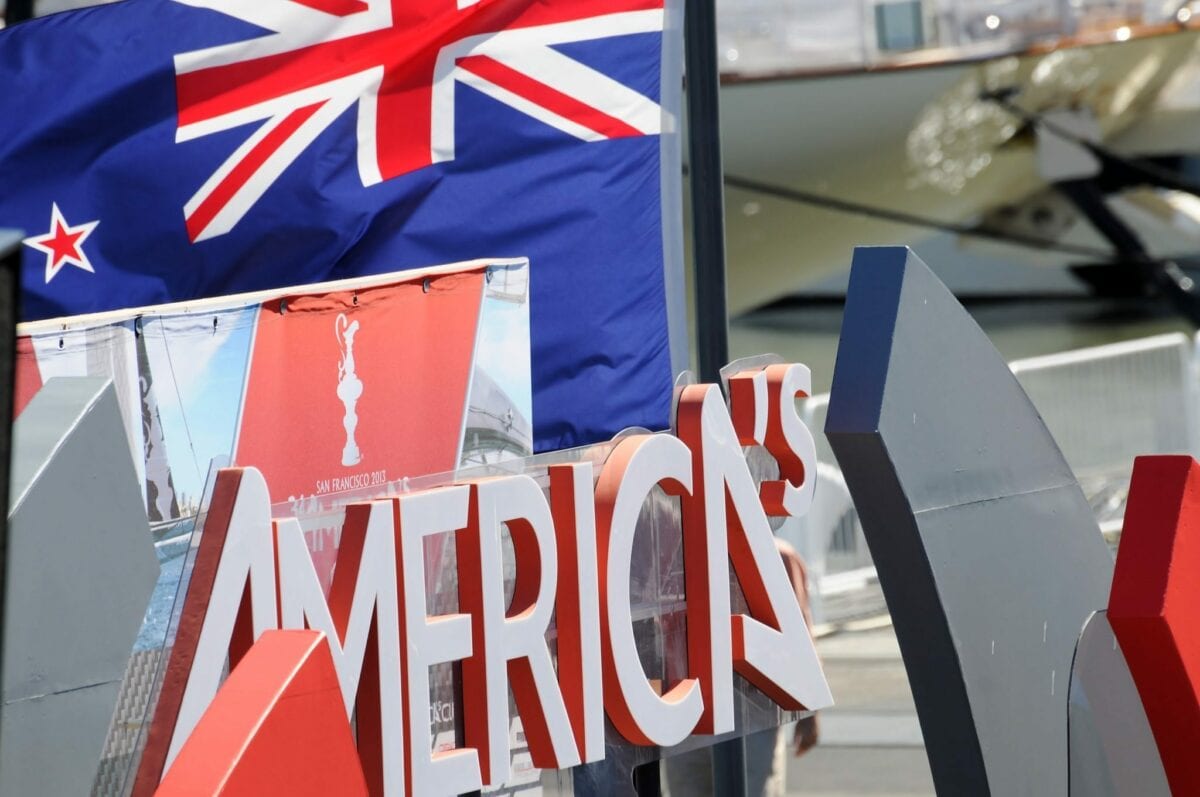 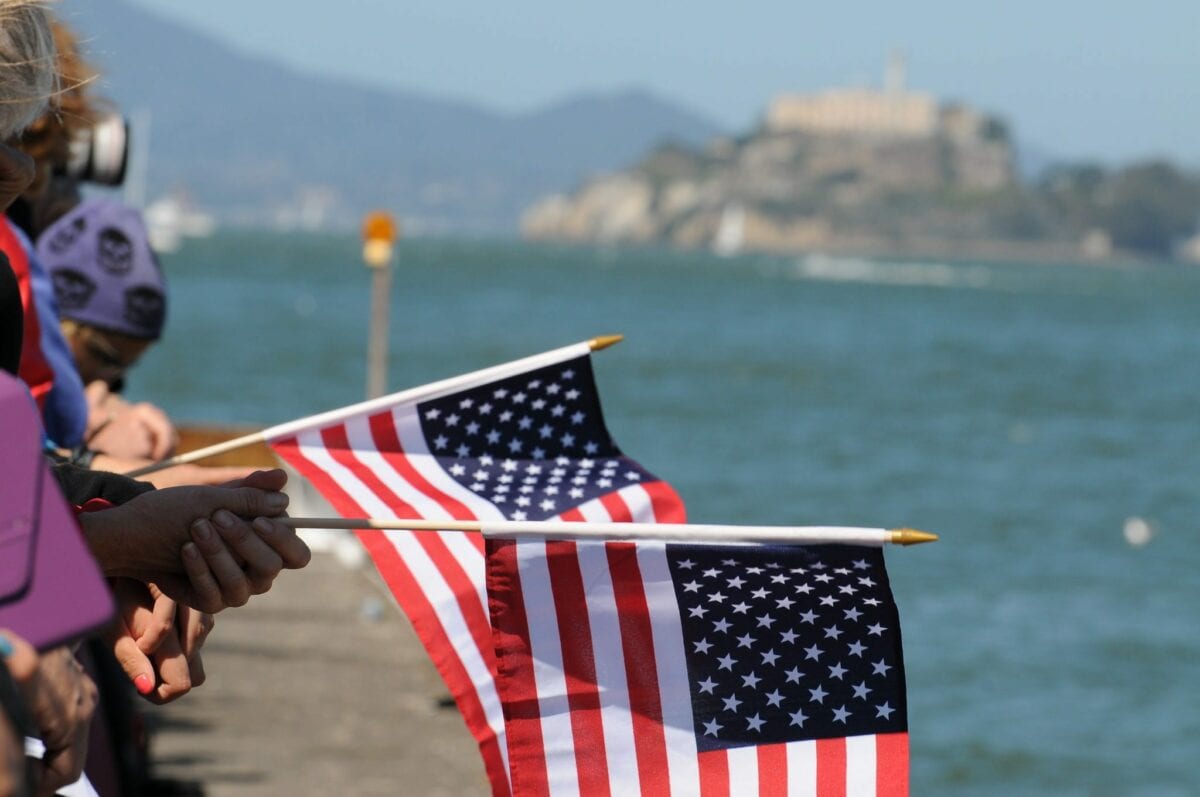 Lots of American flags flying and waving by the American fans. 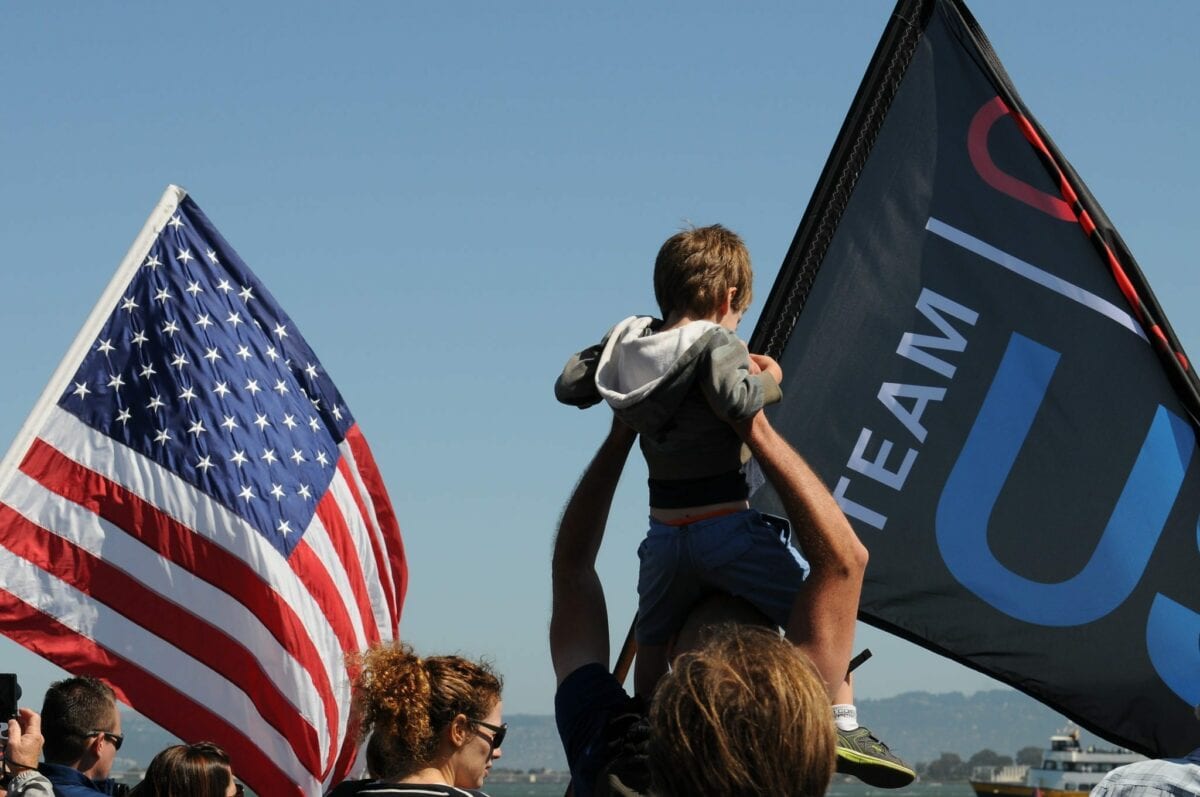 Fans line the shore and watch the racing from the stands at 2013 America’s Cup. 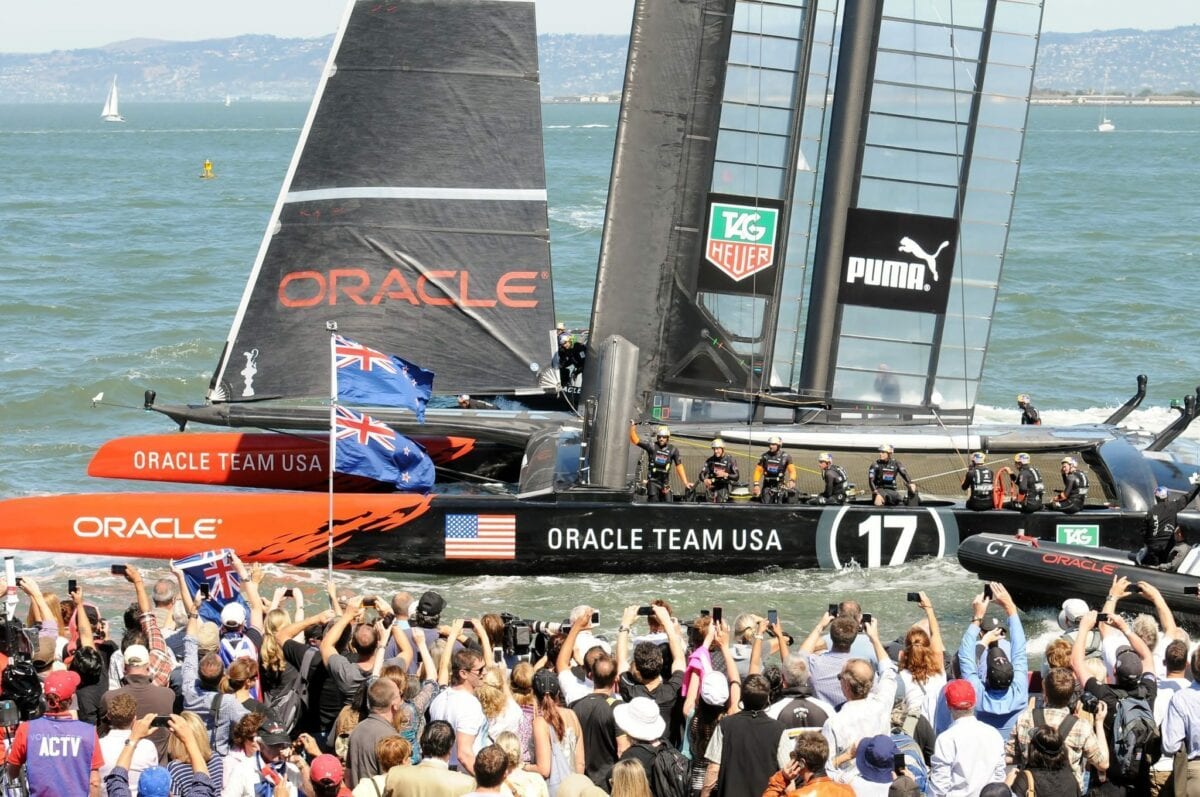