The Best Part Of Belfast Ireland, See the Game of Thrones Locations 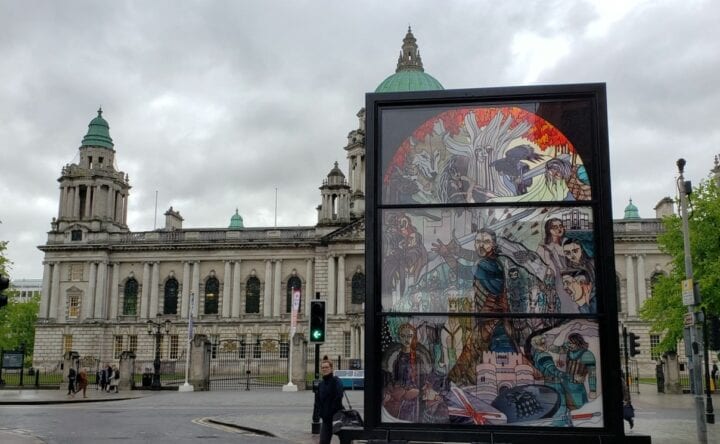 The locations were a great way to see Northern Ireland. The tour was everything I hoped it would be. Additionally, I saw The Giant Causeway, the Rope Bridge, the coastline of Northern Ireland, plus the Game of Thrones hot spots, including some that hadn’t aired. The tour was a great value and takes a full 8 hours.

As I walked to the designated pick-up spot, I spied a stain glass sign. In the background was the City Hall of Belfast. That is when I realized that Game of Thrones has a massive impact on Belfast’s economy. The Game of Thrones production company is an employer, and the locations are tourist attractions and the businesses of Game of Thrones benefits in the area.

Belfast and Croatia are the two most popular Game of Thrones tourist sites. We met near City Hall, drove out of town, along the coast, and went a full day. The end of the day pooped me.

We boarded our bus and drove by a rock quarry that was the location of the Night Watch and The Wall. Another quarry is home to Winterfell. We couldn’t stop at the quarries because it is against the law to park there. Now that the location has become famous. It’s a small site and too congested at the site for sightseeing visitors to stop even when the crew isn’t filming. I could tell from the bus window how the flat quarry walls were, and the guide explained how the crew turned the walls granite into walls of ice.

On the outskirts of Belfast was Carrickfergus Castle. We stopped to see the fortress and use the restrooms. My number one rule of tourism is when there are restrooms, use them. The mystical quality of the day overcast day with minor showers didn’t dampen our enthusiasm. On the contrary, it set the moodiness of the day. Nothing would bother the great time we looked forward to throughout Northern Ireland.

We stopped for a quick visit and role-playing as our favorite characters. I, of course, with my silver hair, was Dany or Daenerys Targaryen, Mother of Dragons, also my favorite character.  The driver said to me,” We will need to add a silver robe for those who want to play Dany.” I laughed because that was my role on this trip. We saw a vast valley with lush green rolling hills; with a gentle mist in the air, we acted out a beheading. This was the location of Ned Starks capture. 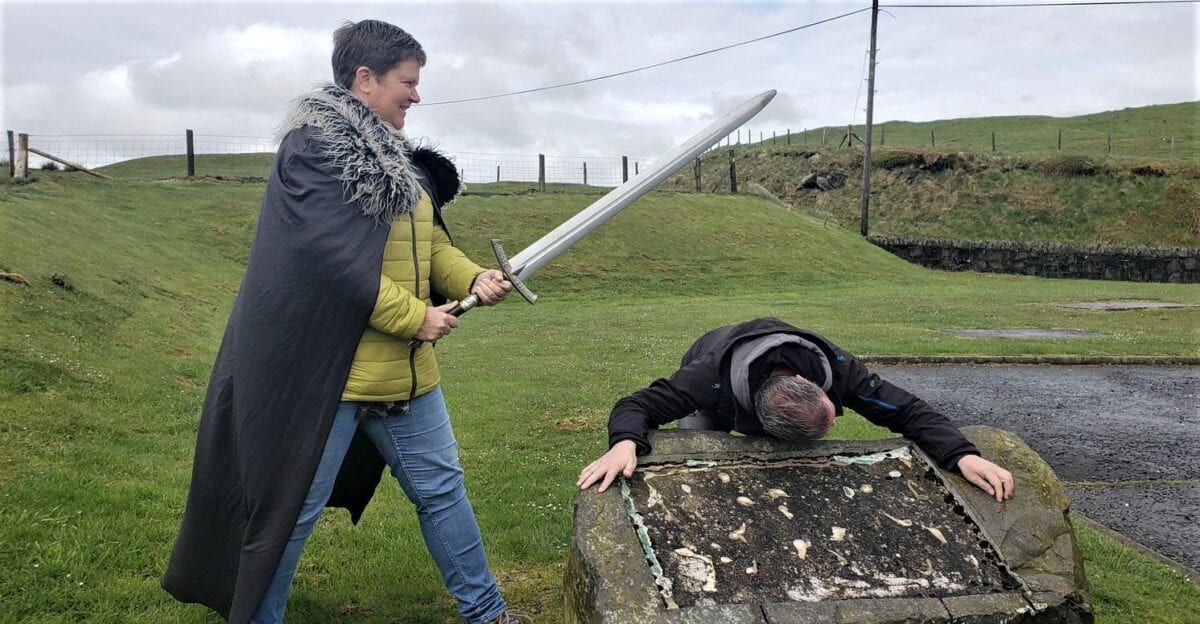 At this point in the tour, I was Arya. I walked along the beach, acting like I was entering Braavos, to find the man with no face. One of the guys took my camera and said, “give me your best, Arya.” Everyone on tour was into role-playing. Each guest on tour had a great time acting out their favorite scenes. Honestly, I never thought it would be as much fun as it was, but I am a fan. I loved it.

Then we went to Glencloy, a small bay and village, and one of the many locations. In the Game of Thrones show, one of the many sword fighting scenes was at this site. You will see below in the photos; our role-playing was still going strong. 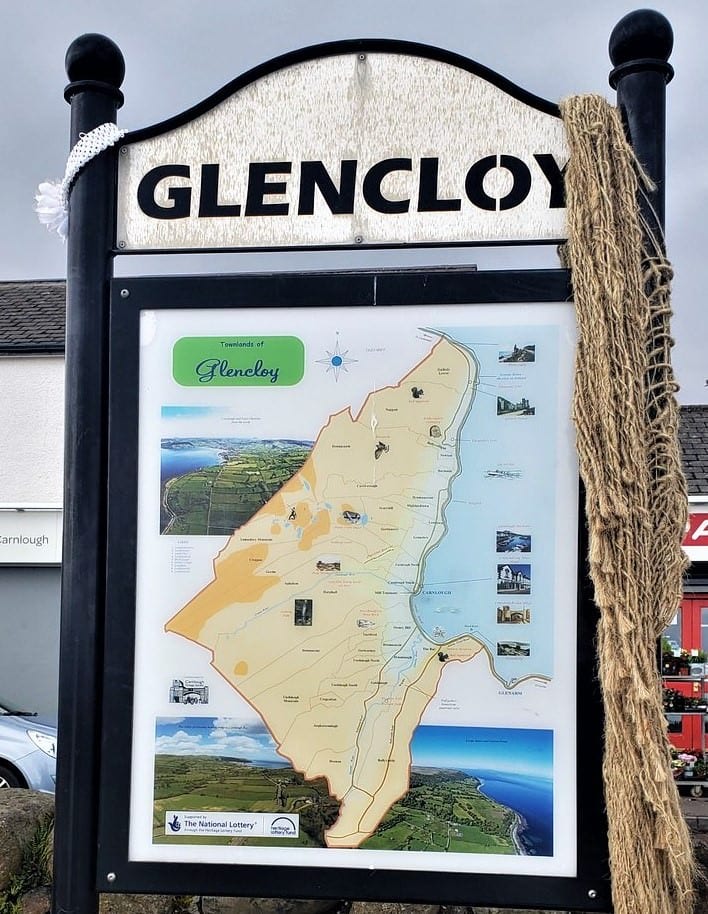 Imagine the location with the rooftops, the local shop, and pub removed through the magic cinematography for the TV show. But, our slayer was ready to wheel his sword. He pretended to be in the fantasy location; he didn’t need CGI and didn’t care who watched him. We all seemed to benefit from being kids for the day, pretending to be characters in Game of Thrones. He pretended to take on an imaginary beast.

On to the Iron Islands

Here is how the location looks. In the show, there is a castle at this location. It is a complete ruin, but again with the help of CGI, it became The Iron Castle.

The Stormlands – One of the Best Game of Thrones Locations

The location where Jamie Was Mortally Wounded

Remember, how Jamie crawled up from the water into the cave only to meet his final, fatal blow? He stood right between the two rocks. I am standing on the rock where he fell, struggling to carry on to meet his sister, defending the city, Castle Rock. 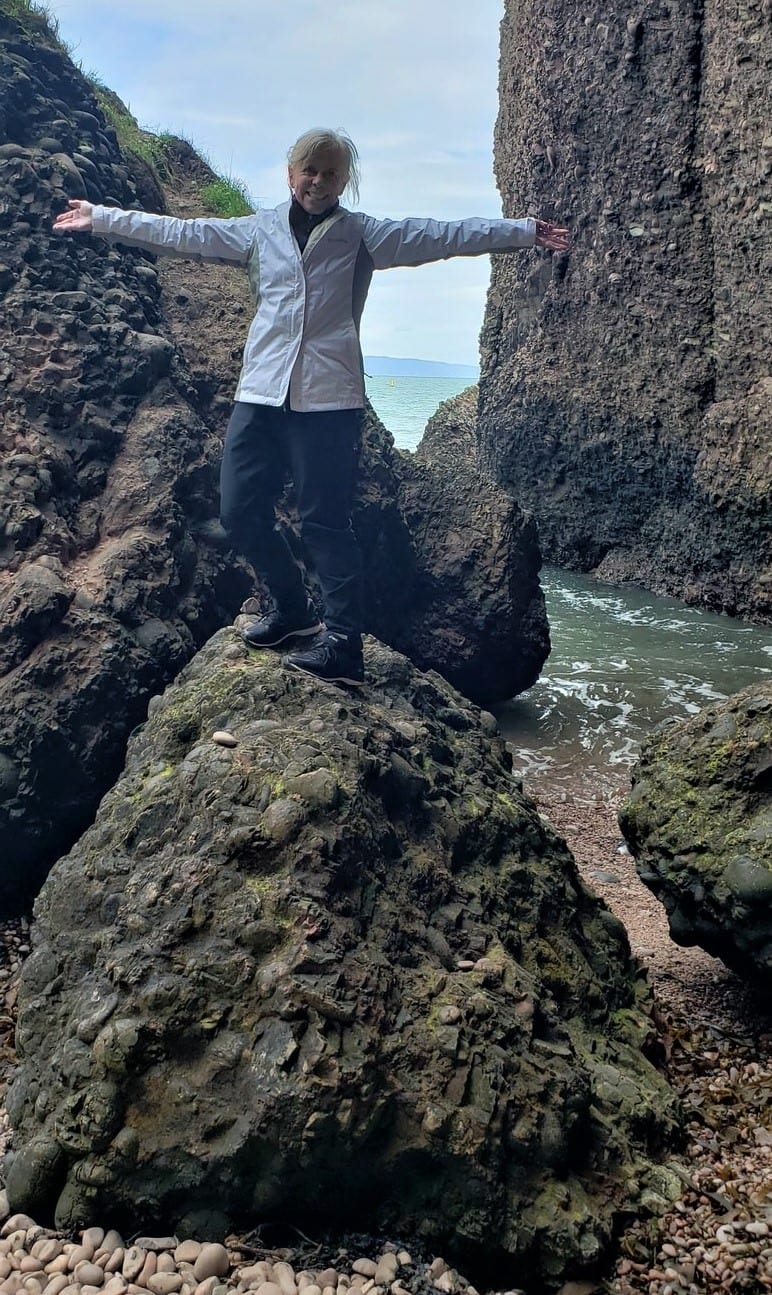 Last, but not least is Arya’s escape from the North. She went down a road called The Dark Hedges. This original groove of beech trees, planted during Queen Victoria’s reign on Bregagh Road, is between Armoy and Stranocum in County Antrim, Northern Ireland. It’s the perfect place to jump for joy as I did. I can say now- I have been to Winterfell, the Iron Islands, the Stormland’s, and many of Northern Ireland’s best coastlines, as well as Belfast.

We couldn’t go to the last location, Castle Rock, because its not a real place, and the set was being destroyed. In Belfast, the production company built a copy of the City of Dubrovnik. This final location was off-limits. They were shooting the final scene, “The Siege of Castle Rock” was underway – therefore, one of the best sites was off-limits to tourists.

Travel Tip – My advice is to go early to all tourist attractions and avoid the tourist buses, they come here regularly, and later in the day. We left early to avoid the crowds. If you want to experience the eeriness of the locations, try avoiding the tourists.

Question: Have you ever had a favorite story that you went to see the actual location? I went to St Petersburg because I loved the movie “Dr. Zivago”  In Edinburgh, I discovered the source of J.K.Rollins pearls of wisdom and the locations that stimulated her descriptions in “Harry Potter.” Chasing famous books or story locations is a fun way to embrace your favorite books, historical stories, and to see what inspired the author. It even works if you go to Israel to see the locations from the Bible – it’s a breathtaking experience! It makes the Bible come alive.

Want to see some of my other favorite photo locations?

Next Story → Belfast, Northern Ireland, In the Summer? Visit The Giant’s Causeway and Rope Bridge